Home » Management » 13 Types of Brainstorming used to get unique Ideas

Brainstorming is Classified as a group creative technique, brainstorming is generating spontaneous ideas contributed by its members to solve a specific problem or to explore the creative options of a particular topic. Brainstorming is a specific user created to generate new ideas or solutions from a group of people by removing their inhibitions.

People are asked to think freely and suggest as many spontaneous and new ideas as possible. Each and every idea generated during the session is noted down irrespective of its use and post brainstorming session these ideas are evaluated. 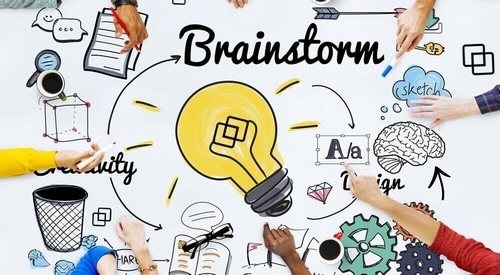 People participate in this type of brainstorming and provide their ideas anonymously. The ideas which are top rated are evaluated by the same group for any further developments for which the group may be broken down into a small set of subgroups that will work on a single aspect of an idea a selected or allocated idea. Once the discussion is complete these subgroups will submit their new ideas again anonymously.

The group collectively will once again rank up or down the newly generated ideas and that may change the process entirely. The ideas that were excluded previously during the discussion might appear once again through natural development and flow of the discussion.

This technique is also known as reverse thinking in which people find ways to introduce barriers in your way and try to prevent you from the objective you are trying to achieve. This method is suitable for small or large groups and for people who find it complicated to create ideas or people who have an asset but are unable to optimally use it.

The first step towards reverse brainstorming is to try and prevent from what you are trying to achieve and reverse those actions and use them to help you overcome the barrier or solve the problem. Identification of the problem is the first step and then the problem is reversed. For example, if you’re trying to develop an advertisement for a deodorant you may ask, “how can I make the ad more appealing to the target audience?” And the question is referred to as, “how can I make the add more repealing to the customers?” Answering that question will give you the ways that you should avoid and whatever remains will be the answer.

In this technique, 6 people are prompted and provided with a piece of paper. All of the participants generate 4 ideas each within 5 minutes. The next step would be the person passes his or her piece of paper to the right and the next person then builds new ideas on the ones that he has got from his left.

This process is continued more times until you have spent about 30 minutes generating all the ideas. You can also get more creative by increasing the number of ideas generated per person. Due to the fact that everything moves in descending order like 6 people, 5 minutes, 4 ideas, 3 times, etc. this type of brainstorming is called as Speedstorming.

HubSpot gives content brainstorming which is visual and is used to frame for how a particular person thinks. The key is an Excel spreadsheet which defines the topic chooses the audience and suggests a content structure along with the form of a post that is graphic, audio or video.

Using these four criteria’s the participants in brainstorming write down as many possibilities and headlines as possible. Then the person will have a clear record of the prompt and suggestions of the content. This is more of an in-depth type of brainstorming which is used for facilitators and brainstormers live on the structure.

In this type of brainstorming the participants write down an idea individually and it is passed on to the other member in the group. It is ensured that every person passes on his idea and receives another person’s idea to which he will add something and password on again. This is performed and tell everyone has commented on everyone else’s idea. This idea southern presented to the group for evaluation together.

The session of brainwriting 6 people are provided with paper and they are prompted and asked to write down as many ideas on it as possible within 5 minutes. Then each person is made to pass his or her idea to the next person and within the next 5 minutes, the next person is asked to do the same and generate ideas on the original suggestion.

The difference between brain writing and speed storming is that and brain writing people are asked to work on the first idea to generate another group of ideas while in speed storming, 3 ideas are passed on to the next person to which he adds another 3 ideas and so on and so forth. These types of Brainstorming are used more for the breadth of the topic and is used with people who need a number of ideas on a very short amount of time.

In mind mapping, a diagram is used to generate information about a particular idea or a situation. The process begins by writing a word which is the central idea of the subject of discussion.

That word is written on the center of a board or a page and the participants then relate to the word and expand it into different categories related to the same word. Several branches are drawn from the word which relates to the central word but from different categories. These categories are then interconnected and a web of ideas is formed around the central idea. The primary benefit of having ideas together is to make the participants connect each idea with the other visually.

Focus group is a type of brainstorming in which a small group of people is targeted for a specific problem. This type of brainstorming is used mostly by corporates to get the feedback of the newly launched product or to get a solution to a particular idea. Although the focus Group is small, it is ensured that it represents a variety of participants.

Choosing participants of focus Group determine the success or failure of the method. The participants are given with a particular topic or idea or problem and their discussion is observed and points are noted down without them knowing. These are then presented and reported.

Mind Mapping and Concept Mapping a similar on many levels except mind mapping used as a single word and concept mapping use an idea or a concept. Concept mapping you choirs use of additional details along with the web, which was mentioned in mind mapping, to subcategorize the information.

In team idea mapping, the participants are given with the particular topic and allowed to brainstorm individually. The ideas are then connected and put together in the form of a map in which similar ideas are grouped and connected together. As ideas are written down on the common board paper the participants mention their inspiration behind that particular idea which helps others to view the idea from the perspective of the respective contributor.

During the discussion, new ideas might be formed which are added in the map accordingly. Once all the ideas are captured the participants can prioritize them and the group can take create a plan and take action.

Based on their inherent qualities, affinity diagrams are tools that are the categorization of information into 4 different quadrants. These are also classified as under Visual types of Brainstorming. These affinity diagrams have multiple uses but can be useful in providing context for brainstorming sessions or idea creations.

Once the ideas are recorded, they are divided into categories and subcategories which leads to expansion of ideas which can then be segregated to form an action plan.

When an electric medium is used to collaborate an idea such as video conferencing it is known as electronic brainstorming. The common network is used where every team member will contribute an idea or suggestion and the suggestions can be adjusted put together to form a meaningful conclusion.

The participants have an option to remain anonymous if the email is used instead of video conferencing. The most important advantage of using electronic medium is the collaboration can be with people in a similar or different geographic location and also in maintaining the anonymity of the contributor.