As per many psychological theories, when you will be asked to recall the items in any order from a list, there are brighter chances that you will remember the things that were at the end of the list first than the other items. Recency Effect is the phenomenon of immediately recalling items that were at the bottom of the end of any record.

In this post, we will dive deep into the world of Recency Effect, and try to understand why it is suggested to make your last impression effective to appreciate better conversions in different endeavors. So, without delaying any further, let us get started right away-

Introduction to the Concept of Recency Effect

Are you a student? Even if you are not a student, assume yourself a student.

Try to remember the essential Physics laws of our sixth grade that we all learned as the critical laws of Physics.

Don’t wonder so much; it is the three basic Newton laws.

Try to remember it!

What is the law that struck your mind first?

I bet it would be the third law of Newton (For every action there will be an equal and opposite reaction). This question is quite common for the students, and they must have nailed this law by a hammer in their subconscious so that they can recite it even in their sleep.

So coming to the topic, the Recency effect will explain to you why that happened. So, let us delve into that-

What is the Recency effect? 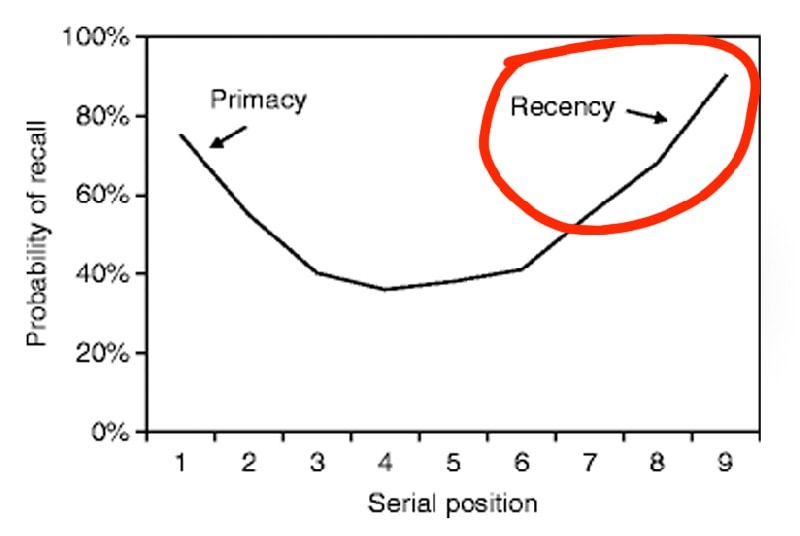 The term Recency effect was first coined by a German Psychologist Hermann Ebbinghaus.

He defines it as

When a person is given a list of data or small information to read, and after sometimes when the person is asked to recollect the data that he understood- Then he will remember the most of the data or the information that the person read the last.

This phenomenon is known as the Recency effect.

It is the reason why you remembered the third law of Newton very fast.

This condition was first significantly explained by Cipher with his serial position curve graph.

His curve graph shows the number of words that you can recall based on the position of those words placed in a list. 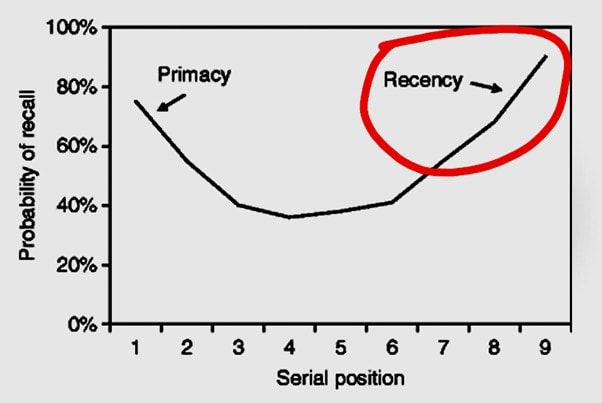 The Primacy effect is contrary to the Recency effect in which the person can remember the information that the person read at first.

A potential explanation behind the primacy impact is that due to the increased amount of attention dedicated to them, the original objects identified are most easily processed in sustaining memory. Once viewed gradually, the primacy influence is increased.

Longer lists were found to reduce the impact of primacy.

In the serial position curve graph, the percentage of the Recency effect is always higher than the Primacy effect. The influence of Recency is also seen similarly to the impact of primacy.

They both have their place in the serial position effect that determines how to recall objects from a collection depending on their location in that chart.

However, the disturbance in reading referred to as interference can work as a distraction, making the person forget the earlier things said. It is also called as forgetting. The intervention work provided useful information to psychology as to how we preserve recollections and then remember them.

The Working theory of the Recency effect

The working assumption of the Recency effect is somehow like the history tab of an internet browser.

The last part of the information will be still in the process of storage which will act as a first cue when recollecting that information.

New information pops up, like the history tab of an internet browser by which you can find the other searches (referring to report) that you previously. If you learn to master this effect, then you can improve your memory power very efficiently.

Where I can see this Recency Effect? 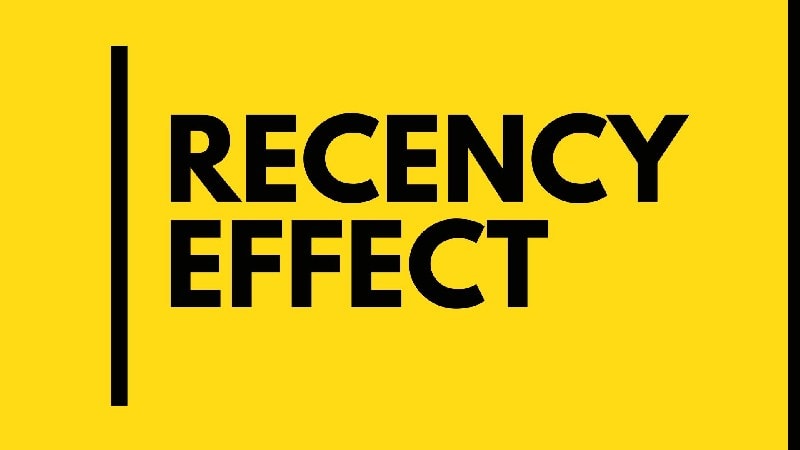 You can see this effect when your brain is working with information.

You can see this effect in advertisements usually-

Notice all the ads that you see on Television or any devices. The offers, the discounts and the main advantages of the product will be in the last session of their advertisement because they need you to remember those things easily.

It is a simple marketing method.

In the publications, if you observe it, the logo of that company will be shown at the end of that advertisement because they need you to remember their logo so quickly just by a glance.

In academics, the critical notes and points of that topic will be given at the end of the session like a summary because the Recency effect will help you to remember that topic very quickly.

Also Read  What is Sports Marketing? Explained and discussed in details

You will certainly remember all the specifics of the last person you saw, and you will have some confusion about the third person you saw.

The previous statement that anyone tells you is inclined to stick further in your mind than the stuff you might say about your topic a week before or a couple of years ago. Let us understand the concept with some examples-

Some very well-known research on the impact of the Recency effect showed how prosecutors would render a judgment in court.

As per the famous psychologists named Miller and Campbell, two cases were brought forward by different groups of participants: one in favour of the defendant and one against the complainant.

In the personal interviews, the Recency Effect is quite evident as well.

When HR managers conduct different interviews, they cannot remember each and everyone they interview in a day. But they have more recent information about to talk regarding the last person.

That is why, it is always suggested to note down the key feature sets of participants because, if the Recency effects come in play in between the process, there can be an injustice to some of the deserving candidates.

Making notes of the candidates help interviewers to have a well-balanced process in choosing the right candidate without making the wrong decisions by being influenced by Recency effects.

The recency effect is one of the most significant psychological practices followed by many sales, marketing, and advertising professionals.

When people hear or see an advertisement for any product in the market, they tend to remember the most recent information about that product.

So, if any product is launched in the product, the marketing and advertising team must ensure the most effective, impressive and positive last impression.

Even, in some of the cases, some of the big and successful brands faced terrible times in the market because of some bad reviews about them. It happened because people started believing those reviews as they were quite recent.

Then brands tried to spread the right information in the market through new ad campaigns, and people again started opted for those brands. All this happened because of the Recency Effect.

How to make the Recency effect as a Leverage for a Brand?

Mastering the recency is a straightforward process but needs practice for a very long time.

The process is simple, always make a note and read it at the end. Always say the essential things or matters at the last of the session that is very important for the listeners or audiences to keep in mind. Always make a note as a summary if you are writing content or article.

Always end with quotes or facts that are related to your topic because that can help your listeners to remember your problem very quickly.

Often this involves sharing things in the centre of your content that you clarified.

A summary or a “recap” provides an entirely loaded package of details to carry.

A statement of intent will remind someone what to do – and more positively, the order or requirement will stay in someone’s head while they prepare their next moves.

Don’t quit on the sad note!

Look for a path to dissipate the stress and quit on the right note.

Refer to the excellent service offered by the other side or how you’ve loved collaborating with them during the process.

When you quit on a down note, check that the conversation finishes with a more optimistic message.

If you’re reading a tough topic, always make a note separately because it can help your understanding as well as help you to memorise quickly.

Emotions that are running high and stress can also influence how things or details you recall. Only doing anything good will not change the whole recollection of the case of the opposite party after a terrible encounter.

That’s it, by practising this method; you can alter your memory and also your readers’ mind. There are various methods to leverage the Recency effect, but you have to sort the suitable one for you.

Even though the Recency effect has many advantages, it also has some disadvantage factors that can interrupt your learning and understanding of things. The factors like disturbance while reading, interference into other information which is not related to the previous information.

Safeguarding yourself from the Negative Influence of Recency Effect

You should always focus on one topic at a time and don’t jump from one and other frequently because it can get affected because of the working of the Recency Effect.

Also, I am not saying that you should not concentrate on the middle part while writing or speaking or presenting, you should always give them content that belongs to the central section and summarise it for better understanding and memorising.

Making notes of things will also safeguard you from the negative influence of the Recency Effect.

Carefully structuring the details will help you express the idea more effectively.

When you place all the essential stuff in the centre of your text, it is most likely to escape the eyes of anyone learning or viewing it. There are also lots of factors that can affect the Recency effect.

Also Read  What Is A Marketing Campaign? Importance and Example

So use it wisely and accurately because it can somehow improve your memory skills and as well as to others.

The recency impact can be defined as the things that arrive towards the bottom of the checklist will be better recalled.

This is linked to the influence of supremacy, saying that at the start of a collection, you recall certain items because it happens first. Both of these phenomenons are part of the Serial position effect, which predicts the remembrance of things on the way they are arranged and said.

For productively using the Recency effect in your favour, you need to pay heed upon some of the key strategies such as

So, all in all, the Recency effect plays one of the most active roles in the memory recalls. Businesses, marketers, and advertisers need to use the positive impacts of Recency useful to their advantage.

What are your thoughts about the impacts of the Recency effect in running a successful campaign? Share your views with us in the comments.