A rhetorical triangle is made up of three persuasion strategies namely logos, pathos, and ethos. These three persuasion appeals always work in tandem during arguments. The great Greek philosopher, Aristotle, in 4th century BCE wrote great treatises concerning rhetorical triangle where he outlined the three major rhetoric appeals as mentioned above.

Essentially, these strategies are what make up the rhetorical triangle. Although Aristotle himself did not use the triangular imagery which was adopted later, he effectively outlined the three persuasion modes and their uses in communication or during an argument.

Logos in the Rhetorical Triangle

Pathos in the Rhetorical Triangle

You can make your audience believe that some ideas or opinions will make them happy and even prosperous just by appealing to their emotions. Emotions are a very powerful tool.

Ethos in the Rhetorical Triangle

Ethos is the credibility, authority and character of the speaker or in some cases, writer. Ethos seeks to assure or show the audience that whoever the speaker is, he/she is a valid or good source of the information that he/she is passing across. For instance, in schools, the ethos of the teachers there is the credibility or authenticity of the degrees that they hold, therefore their opinions on certain subjects are considered to be worthy because of their experience on the subject matter and their academic qualifications on the subject too.

The strongest and well laid out arguments are usually those that are based on points that take full advantage of the three persuasive strategies outlined above. Aristotle was the idea that logos is the most important of the three strategies but it is very important to note that not every audience will adopt your argument by using only logos to persuade them.

The rhetorical triangle can help a speaker structure his/her argument in such a way that the truth is evident even from the onset. This is so because the rhetorical triangle takes into consideration the three main things that are of great importance in an argument; the audience, the context of the argument and the speaker or writer. The three elements determine to what extent your persuasiveness will be in an argument.

When preparing an argument either in speech or writing, it is important too, first of all, take into consideration the three elements aforementioned. If your argument lacks in one or all of the areas then your message will definitely not have the desired impact it was meant to have. This is where the rhetorical triangle comes in handy. There are three simple steps that are involved when using the rhetorical triangle and they are as outlined below.

Steps in the Rhetorical Triangle

You have to make a full consideration of what impact your character or credibility will have the information you are intending to share with your audience. The audience may fail to be fully convinced if the question of credibility is not fully answered.

Ask yourself the following two questions in order to come up with an answer to the credibility question; what really is the intention behind your communication? Is it to call for some sort of action to be taken, is it to provide some information, is it to educate, is it to change an idea or perspective or is it to entertain. The other question is, as the person, who are you? From the onset, you need to establish what you stand for and who you are by explaining where your expertise has been gained from. 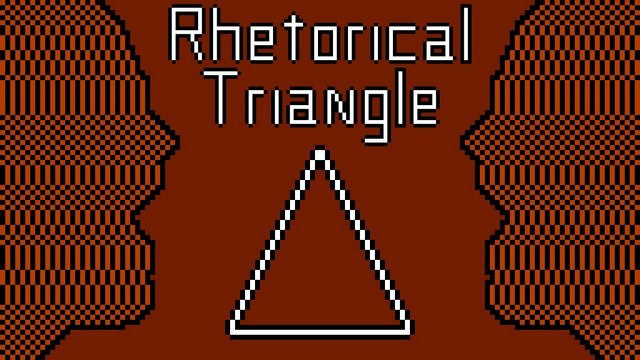 Consider the message you are going to deliver and the context you are going to deliver it in. Here you need to answer the question of logic. The two following questions will help when answering this question. How am I going to present my ideas to the audience and how am I going to support my stand? The other important question is: what is the context of the message is there any other line of reasoning that I need to come up with then dismiss?

These questions will help you to place your presentation in the correct context and to avoid confusing your audience by choosing the wrong method or even place of communication. You need to do some background checks to ensure that you have all the information you need for the presentation.

NEXT
Types of Communication