Home » Management » Ladder of Inference – Steps, Proceeds and Use

The ladder of inference is a theory that implies that people jump to conclusions by putting them together to make it a five. Decision making is an essential step in every aspect of life, and in this fast-moving and ever-changing world, most of the time, we are under pressure to make fast decisions rather than correct ones.

In such cases, one may end up putting two and two together to make five. Hasty jumping to conclusions is not an uncommon thing, and you may know people who do that. Sometimes, it is known as the process of abstraction since it helps to understand the steps which can lead you to arrive at incorrect conclusions.

The theory was designed by Chris Argyris, who is considered a leader in organizational learning, and the concept of the ladder is all about learning and unlearning and reasoning,

The theory of Ladder of Inference

This theory helps to share a light on the thought process that we go through. It describes how we get from a fact to a decision by following different steps.

The ladder starts at the following steps and proceeds as follows 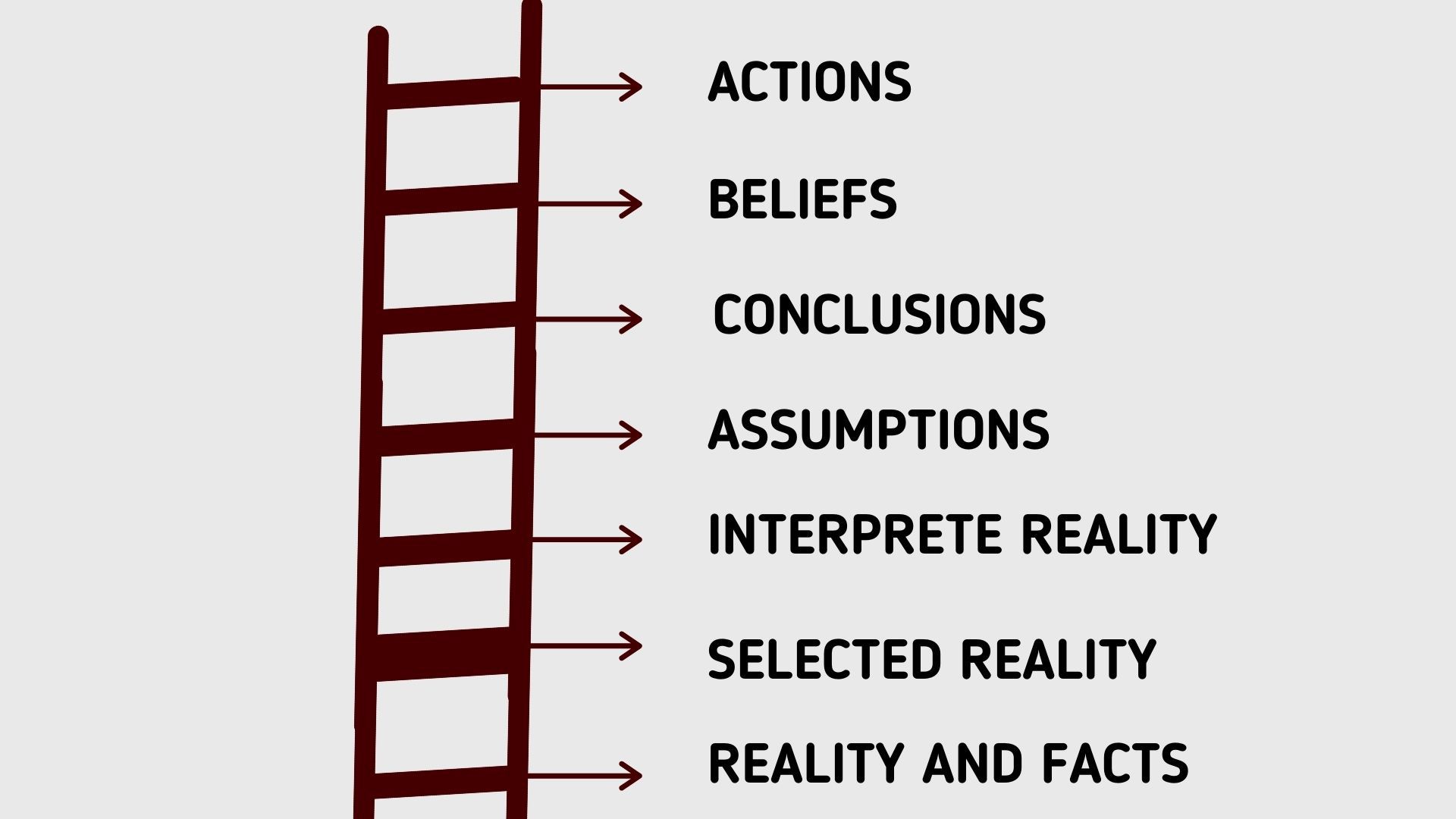 This is all the available data that is directly observable in your surroundings. That includes verbal and non-verbal communication from different people and different sources. Reports, surveys, if actual numbers are the ones that are qualified as reality and facts.

Most of the time, we don’t pay attention to all the available facts, and the choices are sometimes conscious. We knowingly ignore specific facts and focus on specific other facts.

The selection process more often happens with the help of the subconscious mind.

Whenever we get input from other sources, we interpret it. It may be words, written communication, video, gestures, or any other form used to convey information, gather all of it, and interpret the meaning.

However, not every time, the interpreted meaning is the intended meaning.

Having assumptions is the most common thing which all of us encounter. We have assumptions about many things, people, and processes. These assumptions get added to the interpreted reality to form a conclusion.

The conclusion is the crux or summary of what you have understood and not what is intended to understand. The number six for someone may look as nine for you if you stand on the wrong side.

When you have a conclusion in front of you, your beliefs act and try to modify the conclusion. You concluded that someone is a bad person, but beliefs say that the person is bad unintentionally, and you may forgive him. Bias towards the person or the process also affects the inference ladder.

Based on all the data that you have collected above, you decide to take action. This action may be the trigger for the cycle to repeat, depending on the decision you take. For example, if you decide that someone is not a good person, you will avoid meeting that person.

This action may trigger another reality and a fact-based cycle of the ladder of inference.

How to make use of Ladder of Inference

Following is the stepwise process which will assist you to remain objective while working or challenging others.

You may have your assumptions and beliefs that have led to a conclusion about something and from your reasoning. Still, it is essential to reconsider it time and time again since there may be multiple factors affecting the reasoning, which may change over time.

2. Identify your position on the ladder

As discussed above, there are seven different steps in order of inference. You must understand where you are and act accordingly. You may be at selected facts or assumptions or beliefs. You must test thoroughly every step against the facts so that you don’t make erroneous assumptions.

3. Analyze your reasoning by working back and retracing your steps

This will help you to throw light on some assumptions which you are doing wrong. Ask yourself at every stage, what are you thinking, and why do you think about it.

This will help you to understand the logic behind your reasoning, and it will correct your reasoning from the core if required. Ask yourself questions like what are the other options that I could have assumed? What made me to discard those options? Are my assumptions valid?

4.When you have discovered a refined sense of reasoning, you will see the existing fact and assumptions in a new light. These new-formed assumptions may be more logical and fact-based than earlier ones.

You will be able to trace your step forward and get rid of your unrealistic assumptions. This will help you to make proper decisions that are based on facts and opinionated.

Avoid climbing the ladder of inference

These things that you take for granted are deeply rooted in your belief system. You must pause for a moment, acknowledge their presence, and make sure that they are not baseless assumptions but useful facts. If they are not facts, you need to weed them out lest they interfere with your future conclusions. It is essential to consider there might be other perspectives apart from your perspective, and they could be correct.

Thinking and assuming that only your assumptions are correct is a form of narcissism that should be avoided. It is one of the reasons why people climb the ladder of inference.

Avoiding baseless assumptions and sticking to facts will help you to avoid climbing the ladder.