The johari window is a technique which helps people know more about themselves, which helps them in adapting better to their surroundings.

Quite simply, if i think i am extra smart, and the people around me, via the johari window prove that i am knowledgeable, but there are equally smart people out there, then my attitude towards others will change and will mellow down a bit.

Johari window is a psychological technique introduced by Joseph Luft and Harrington ingram in 1955. In fact, the word JOHARI comes from the combination of the names of the inventing psychologists – Joseph and Harrington.

Let us look at how the Johari window is executed.

Basically, the team members are asked to sit with each other. Each of them is given 57 adjectives, a list of which is pasted below. Now these team members have two tasks.

Now, once the initial exercise is complete, there are 57 adjectives given to the participants. Source is wikipedia. 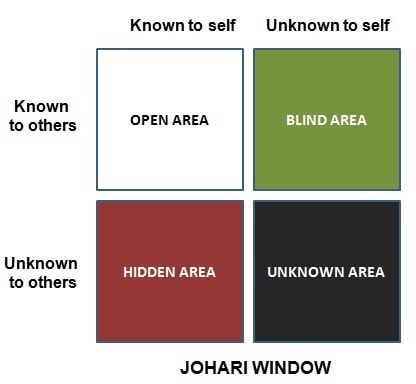 As can be seen from the johari house, the quadrant is comprised of 4 zones. The adjectives are placed in these 4 zones. Here is how it works.

Free or open area – Things you know about yourself, and which are agreed upon by others (ex – you are reliable)

Unknown area – Things you don’t know about yourself and which others also don’t know (all adjectives which were NOT used to describe you will fall in this quadrant).

How to use this information?

The larger your open area is, the more self aware you are, and more are the chances of you being a team player. The senior members of a team are always expected to have a larger open area and so is the leader.

The more open they are, the more trust can be built on them. On the other hand, if there are blind areas or hidden areas in a senior member or team leader, then that can create problems as it means that the senior member himself is not communicative.

The blind area in Johari Window 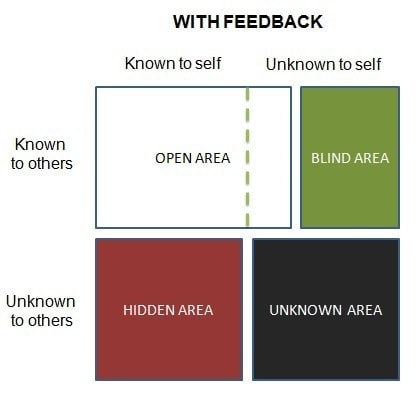 Your colleagues might know several things about you that you yourself don’t, One of the advantages of the Johari window is that you get to know your blind areas. Many of these things can help you improve.

People who are not so good at communication, or who don’t think that others have feelings, can benefit the most from talking about the blind areas.

One of my managers had a habit of taking meetings individually, instead of taking team meetings. The effect was that we didn’t know what our team members were up to. The effect was that we were not motivated by their success or we couldn’t offer support when they were down. When we had a group meeting, we complained about this and then the team meetings started. Immediately there was a rise in tempo in the team.

Overall, the application of the blind window is positive only when the person is ready to take feedback and improve.

The hidden areas in the Johari Window 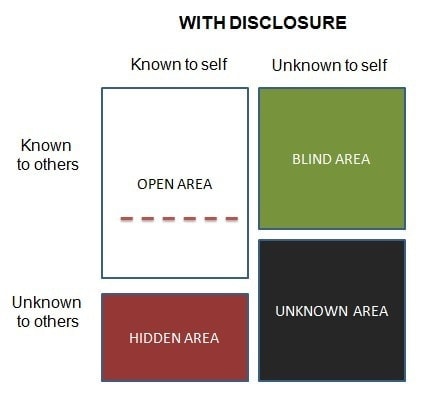 The hidden area is the area in which a person knows things about himself but his team members don’t know the same about him. So if I am a new comer, and i write knowledgeable as an adjective for myself, other experienced people don’t know that i am knowledgeable and hence it is more likely that this fact will come out in the open due to the Johari window.

Any new member in the team will have hidden areas. It is generally observed that new members benefit the most when they analyse themselves or when they are analysed by others. This is because maximum transfer is possible of adjectives from the hidden area to the open area.

When someone’s personality is hidden, and they are sitting in a group, as they talk about various things, their open area will increase in size and their hidden area will decrease. This helps in increasing confidence and increasing trust and support within the team.

Hidden areas can be lessened only by “Disclosure”. And disclosure depends on the type of work atmosphere you have within the team, or the work culture that you have built up in the organization. If the culture us open, you will see more benefits from the Johari window especially in the hidden areas. If the culture is closed and disciplined, hidden areas are more likely to remain hidden, causing harm to open areas.

Unknown areas in the Johari Window

Unknown areas are those which are not known by you and neither by your team members. So what is the use of unknown area? If you wanted something out of the box, something which is neither hidden nor blind, then you have to select qualities from the unknown areas which have to be adopted.

1) Taking feedback – Feedback will help you increase your open areas by reducing your blind areas. As you know more about what others are thinking, you tend to improve on that and the next time, when you go in this exercise, you will find a larger open area which is the mission of Johari window.

2) Disclosure – If there are hidden things, then you need to come out in the open for the same so that again, your open areas can increase and your hidden areas can reduce.

Here is a video by Marketing91 on the Johari window.