When you have been in the accounting industry for a very long time, then there is one term that you might have heard for sure. We are talking about going concern. Surely you have come across this term, and you know what it means.

But it is one thing to know about the terms and a whole other thing to have an understanding of the whole concept. So, here we are going to discuss it a little bit. The fundamental concept of ‘Going Concern’ means a business entity will keep its accounts as if it’s going to continue its operations for a foreseeable future.

We will tell you all about the definition of the concept of going concern and some other details as well. Without wasting any more of your precious time, let us get started with the post.

More simply, you can understand Going Concern as the opposite of Bankruptcy.

So, how about we provide you with a simple definition of the term so that you can understand it in the best way?

Going concern is a basic term that is used in accountancy to talk about a particular company that has all the amazing resources which are essential to make sure that the company can operate for an indefinite period until there is evidence provided for the contrary happening.

Also, the term going concern can be used to describe the ability of a company to make some money which is enough to stay proper and afloat during tough times so that it doesn’t have to face bankruptcy in any way.

So, there is simply not a single speck of doubt about the fact that it is an important term for sure and people need to know about it as well. In case there is a company that is going concern in the best way, then there is a chance that it has already gone bankrupt.

Also, the assets of the company will be liquidated in such cases. There are so many examples for it, such as the startups which are not going concern companies and that too after the latest tech bust that happened in the last few years.

Understanding the Concept Of Going Concern

There is simply not a single speck of doubt about the fact that going concern is one of the most important things for the accounting industry and hence we are going to provide some details so that you can have a better understanding of the concept.

There are different companies that are currently going concern, and these companies might defer the reporting of the long-term assets until and unless there is a more appropriate time provided.

The times that we are talking about are the annual reporting times, and the company needs to provide financial statements during that time only. The quarterly earnings are not included in here.

The company that we are talking about here will remain in the phase of going concern when there is a sale of the assets which are not impairing the ability of the company to continue operating in the best way.

We are going to provide you with going concern with an example to help you understand in a better way. The closure that happens for a branch office which is pretty small and the reassigning of the employees to different departments of the company is the perfect example of that.

The accountants that view any company as going concern would generally have a belief that the firm will wisely use all the assets to ensure that the company doesn’t have to liquidate anything in the first place.

Also, the different accountants can employ all the principles of going concern to make sure that they can properly determine the process which with the company should go ahead and conduct any sale of the assets that it has.

The reduction of costs and the shifting to different products is also determined with the help of the going concern principles. So, there is no doubt about the fact when we say that it is one of the most important terms that you will ever find in the accounting world.

Why paying attention is Important? 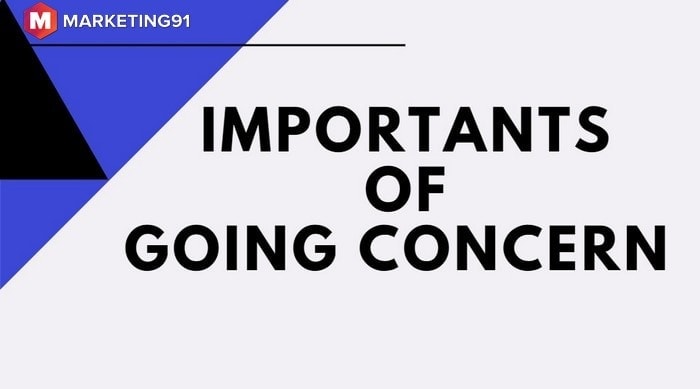 One of the most common questions that people tend to ask about going concern principle is that why does it matter in the first place? We are here to tell you that it is one of the most important concepts that companies need to know about.

But then again, you will be asking why. So, here we are going to provide you with an explanation for the importance of the process, and you need to understand the going concern in the best way for sure.

When it comes to the upholding of the financial market integrity, there is no doubt that the process is very important. To achieve that goal, several financial statements are prepared most effectively and efficiently.

These financial statements are then used to reflect the different accurate values that the firms have as well as the assets that they have too.

Also, it is important to ensure that these pieces of information are provided and presented in a pretty fairway as well. So, in order to make sure that it happens in the best way, the accounting concept of going concern is used.

So, that is one of the most important reasons why it is a very important concept for the world of financing.

We are going to provide you with an example to make you understand in a better way. Say that there is a firm which is going bankrupt or is on the brink of it.

So, naturally, the company will have to sell the entire inventory and that too at a very less price. They will not be able to sell the assets that they did at the market price earlier for sure.

This is because they don’t really have a normal amount of time that they need in order to sell the products. Selling them in an emergency such as bankruptcy would actually lower the prices for sure.

In such a case, the assets of the firm would have a very different value, and that value is dependent on the fact that the company is going concern or not.

We hope that you totally understood the concept and are ready to move to some of the other interesting details about the going concern concept for a company.

Red Flags Which Indicate That a Company Is Not Going Concerned

Well, there are certain red flags that might appear on the different financial statements that are provided about the traded companies which are private and these signs always tend to indicate that a particular company is not really going concern or will not be in the future.

There are some long term assets that don’t really appear on the quarterly statements of the company as well as on the balance sheets as well. This is done because if the company lists the assets, then it might be a sign that they want to sell it in the first place.

Also Read  What is a Service Level Agreement or SLA? Definition, Importance and Examples

The inability of the firm to meet all the obligations without some sort of substantial restructuring, as well as the selling of the assets, will be a major sign of the fact that it is not going-concern anymore. 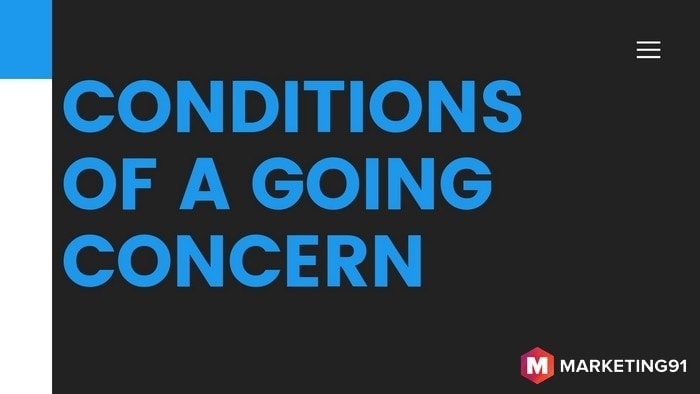 There are some conditions that would determine whether the company should disclose on the financial statements whether they have some doubts or not when it comes to going concern.

So, to know all about it, the company needs to have a clear concept about the going concern principle and that too in the best way.

The financial statements of the company should be able to reveal all the conditions that would show some support to the substantial doubt which is created in order to make sure that it is going concern.

The statements also need to show the interpretation of the management as well.

So, these are some of the important things that you need to know about going concern so that you can solve the problem in the best way.