Home » Lists » The 14 Most Expensive Guitars in the World

The guitar is one of the musical instruments of choice for several musicians. It is available in various size and shapes and of course at different price tags. It does not come cheap as you will have to spend a considerable amount of money on purchasing it.

Sometimes people travel to pawn shops or local music shops to buy a piece at a reasonable amount.  Musicians and especially good ones are very particular about their instrument.

More than often the order for a specific guitar is placed, and the maker has to make it as per the direct instructions. Finding the right guitar is a personal choice, and only the probable owner can say about how the instrument is fitting in his hands.

Do you know that some of the guitars in the world are priced very high? When a legendary name is attached to a guitar, it automatically becomes as famous as its owner and creates history by commanding astronomical prices. These have been sold to others personally by the owner or through auctions after his death.

The list of most expensive guitar names a few of them which are famous because of their associations to legends and the music that has been produced through them.

Music lovers and collectors understand the greatness of owning a part of history, and the people who can afford them are willing to possess them at any cost. Guitars, the signature status of cultural icons, have become part of collectibles.

#1 Reach Out to Asia Fender Stratocaster

Sold at a cool amount of just 2.7 million dollars Reach Out to Asia Fender Stratocaster occupies the numero uno spot in the list of the most expensive guitar in the world. The guitar was a white Stratocaster made for 17,000 Euros. The idea was conceived by Bryan Adams, Canadian rocker, to raise funds.

The guitar was auctioned by Sotheby’s as part of a charity to aid the victims of the tsunami and Indian Ocean earthquake that happened in the year 2004. More than 230,000 people were killed, and unbelievable numbers were affected.

Reach Out to Asia Fender Stratocaster was sold on 16th November in the year 2005. It was signed by most of the rock stars in the world, for instance, Bryan Adams, Ritchie Blackmore, Sting, Paul McCartney, Tony Iommi, Pete Townsend, Jeff Beck, Mick Jagger, Eric Clapton, and Brian May. 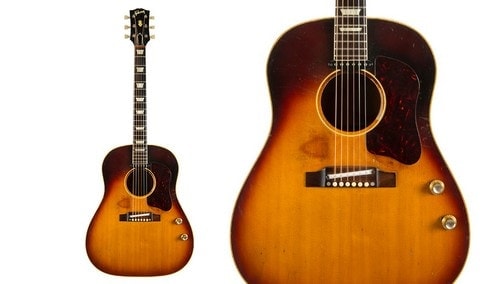 1962 J- 160E was bought from Rushworth’s Music House located in Liverpool by John Lennon in the year 1962 on 19th September at a paltry sum of just 161 pounds. It was one of the identical twin guitars that were purchased by John Lennon and George Harrison.

Several classics from Lennon like I Saw Her Standing There, This Boy, I Want To Hold Your Hand, She Loves You, P.S. I Love You and Love Me Do associate with this formidable guitar. The guitar was lost during a 1963 concert, and it was in the year 2014 that the new owner John McCaw discovered through an article that the guitar he was using was the famous guitar of John Lennon.

On 7th November in the year 2015, John Lennon’s 1962 Gibson J – 160E Acoustic – Electric was sold to an anonymous bidder at 2.41 million dollars making it the second most expensive guitar to be sold in the world. The proceeds of the sale were shared by the owner of the guitar and the widow of John Lennon. She donated her share of the proceeds of the auction to Spirit Foundation.

Peter Green/Gary Moore’s 1959 Les Paul was sold for an amount of 2 million dollars and has become one of the most expensive guitars in the world. It was owned by Peter Green, founder of Fleetwood Mac and was later used by Gary Moore for several years.

Peter Green/Gary Moore’s 1959 Les Paul was sold in the year 2014. Kirk Hammet, the Metallica guitarist, purchased it from Richard Henry Guitars at such an astonishing sum making it one of the most expensive guitars of all times. 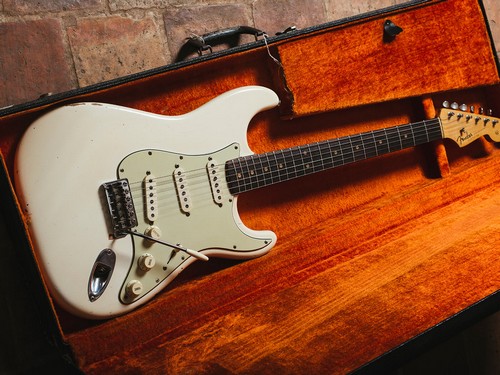 Jimi Hendrix, the iconic and one of the most famous guitarists, songwriter and singer in the history of rock music is credited with playing with this musical instrument Fender Stratocaster.

Originally the strat was right-handed, but Jimi turned it into left-handed and played Star Spangled Banner at Woodstock with this instrument. Jimi Hendrix’s Fender Stratocaster was lost under the mysterious condition for several years, but it later resurfaced.

The guitar was sold at an auction and was bought by the co-founder of Microsoft, Paul Allen. At a price tag of 2 million dollars, Jimi Hendrix’s Fender Stratocaster became one of the most expensive guitars of its times. 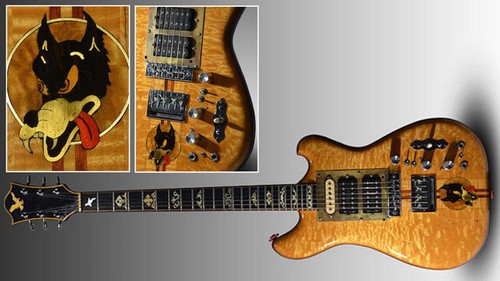 Jerry Garcia placed an order at Luthier Doug Irwin for a customized guitar. The order was completed in the year 1973 and handed over to Garcia. It was dubbed as Wolf and became the owner’s main musical instrument for the next four years.

Jerry Garcia’s Wolf was sold at Guernsey’s auction on 8th May 2002, for a sum of 789,500 dollars. In the year 2017, it was auctioned again and this time fetched an astonishing amount of 1.9 million dollars, making it one of the most expensive guitars in this world. 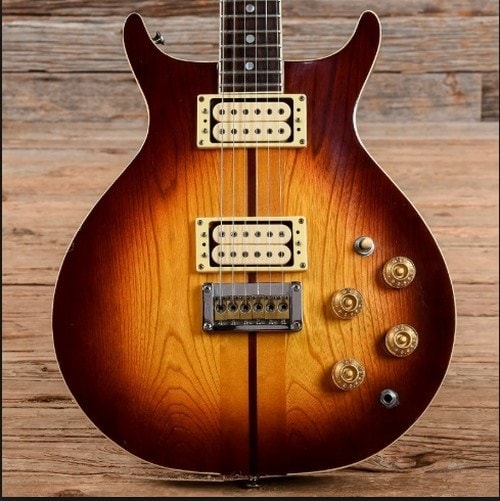 Each of the musical instruments is considered a national treasure by the Jamaican Government.

Bob Marley’s Washburn Hawk is a 22 fret double cut and was a part of customized Washburn 22 series. It was the first of the Washburn series to be sold and hence had a history of its own.

Bob gifted the guitar to Gary Carlsen, his guitar technician. Later it was bought by the Jamaican Government and placed in a museum for public viewing. 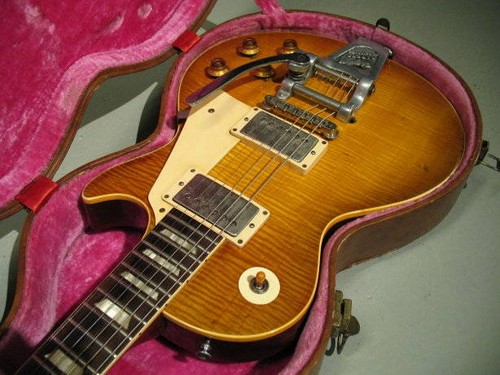 At an auction held in the year 2003, Keith Richard’s 1959 Les Paul Standard was sold for a cool 1 million dollar making it one of the most expensive guitars in the world. It was owned by Keith Richards of Rolling Stones, who played the instrument between the years 1964 and 1967.

It was later sold to Mick Taylor who joined the Rolling Stones group two years later. The instrument has been used by several famous guitarists and is said to have been even misplaced or lost for a considerable time in between.

Eventually, Keith Richard’s 1959 Les Paul Standard was sold to a private collector at an auction with the tag if 1 million dollars. 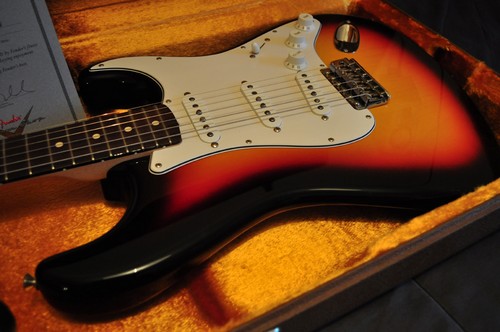 Bob Dylan’s 1964 “Newport Folk Festival” Stratocaster has a history of its own, and with a price tag of 965,000 dollars, it became one of the most expensive guitars in the world. This is the famous musical instrument that the star played with at the Newport Folk Festival in the year 1965.

The event had some infamous moments of its own because Dylan turned up with an electric back-up band and it was received with mixed reactions from the crowd. He was hurt by it.

Nobody knows whether the guitar was accidentally or deliberately left behind on the plane piloted by Victor Quinto. Decades later, after sorting out the legal dispute, Quinto’s daughter and Dylan agreed to sell it by Christie’s auction. 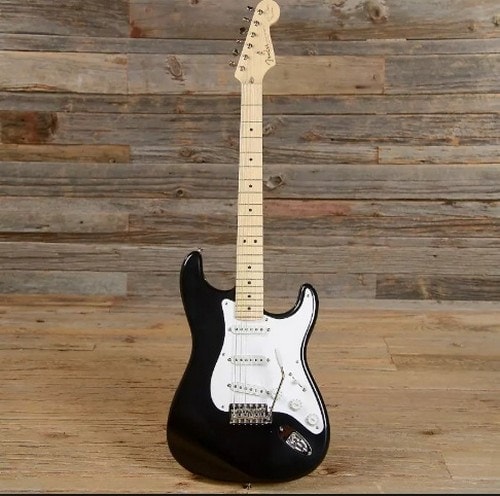 He gifted three of them to his friends and asked Nashville Luthier Ted Newman Jones to make an assembled guitar from the three left with him. This guitar was later named Blackie as it had a black finish.

Blackie was used onstage by Clapton regularly since the year 1973 and had an exciting and deep association with the guitar whom he considered an integral part of his own identity. Clapton stopped using the guitar after his tour of 1985 and n the year 2004 it was sold at an auction held by Christie’s.

At a price tag of 959,500 dollars, Blackie was auctioned off. Eric Clapton’s “Blackie” Stratocaster Hybrid became one of the most expensive guitars of all times, and the money was donated to support Crossroads Centre. 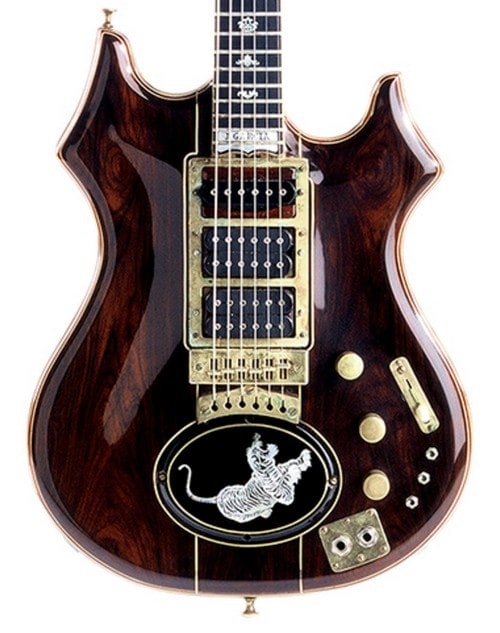 Since the year 1972 Luthier Dough Irwin started making guitars for Jerry Garcia. In the year 1979, Garcia replaced his guitar named Wolf with Tiger that he had ordered in the year 1973.

As Luthier was given total freedom in its creation, the maker came up with an amazing and extraordinary product. It was simply beautiful with tonewoods like vermillion, maple, and cocobolo in contrasting layers. On the fretboard and body’s back, the manufacturer had designed pearl inlays in a detailed manner.

Jerry Garcia’s Dough Irwin Tiger was at last sold in 2002, 8th May to Jim Irsay, owner of Indianapolis Colts and also of Bob Dylan’s 1964 “Newport Folk Festival” Stratocaster. At a price tag of 957,500 dollars, Tiger became one of the most expensive guitars to be sold in the world. 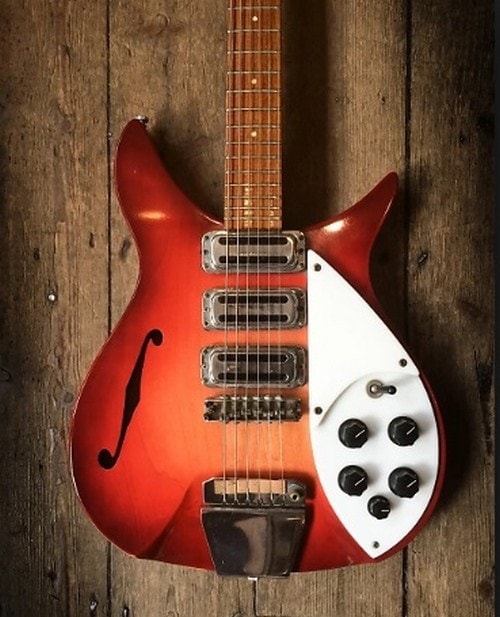 At a price tag of 910,000 dollars, John Lennon’s 1964 Rose-Morris Rickenbacker 1996 became one of the most expensive guitars to be sold in the world. Ringo Starr, along with his wife Barbara was the owner of a treasure trove that included eight hundred personal items.

The guitar was part of this lot which was put up for auction at Julien’s in the year 2015 December 3 to 5. Jin Irsay purchased John Lennon’s 1964 Rose-Morris Rickenbacker 1996 along with some other instruments making it one of the most expensive guitars of all times.

The guitar was a replacement for Lennon in December 1964 at a concert the Beatles were performing after his own black 1964 Rickenbacker 325 was damaged during the performance.

Lennon played with the guitar at shows and recordings, and in the year 1968 gave it as a gift to Starr. A portion of the auction money was donated to a charity Lotus Foundation U.S which works for women’s issues and child welfare. 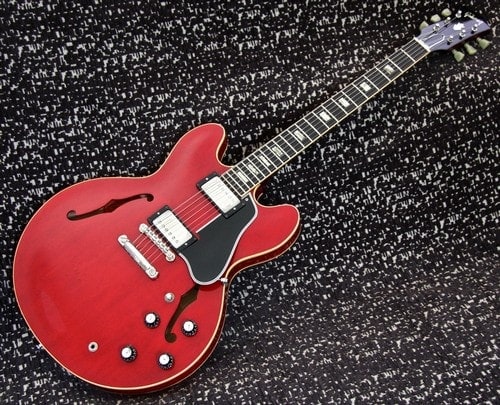 The musical instrument was purchased in the year 1964 by Eric Clapton, and the best part about it is that he used it throughout his career one time or other. Whether it was his stint with Yardbirds or John Mayall’s Bluesbreakers or his solo career, it was an integral part of his career.

Eric Clapton’s 1964 Gibson ES-335 TDC was put up for sale that was held by Christie’s in New York on 24th July in the year 2004. It created history and became one of the most expensive guitars to be sold in the world. 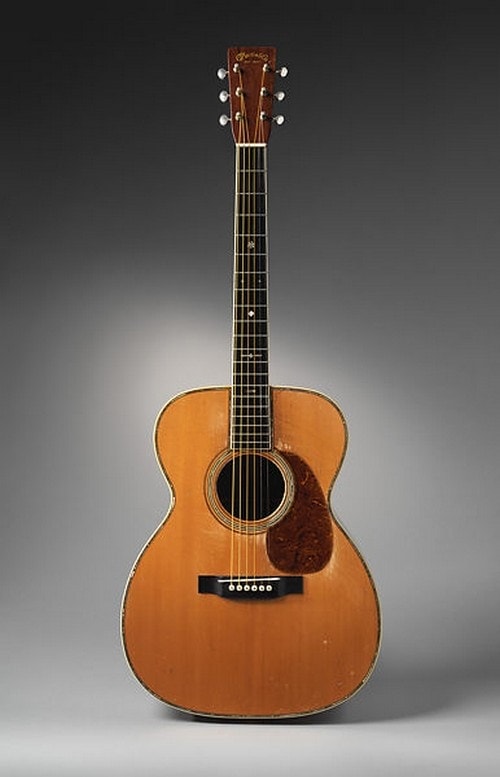 Eric Clapton used Martin 1939 000-42 Acoustic during MTV Unplugged session in the year 1992. This guitar is a very pricey and exclusive item that has been used on numerous classic recording sessions.

If any of the acoustic guitars are still in playing and good shape then it will command a much better price. A testament to this fact is Eric Clapton’s Martin 1939 000-42 Acoustic that fetched the highest price for an acoustic guitar.

Eric Clapton’s Martin 1939 000-42 Acoustic was sold at an auction for 791,500 dollars, making it one of the most expensive guitars in the world. The money was donated to Crossroads Rehabilitation Centre.

Related: 20 Top brands in the USA 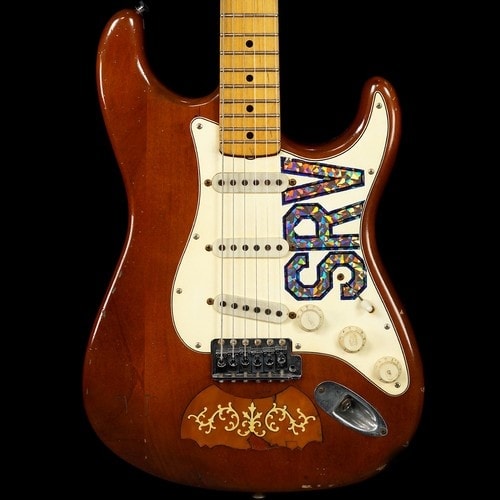 It was considered one of the most stylish and exclusive instruments of its time. Stevie Ray started playing with the Fender Stratocaster guitar since the year 1970.

After Stevie Ray Vaughan’s death in the year 1990 in a car crash, it was his brother who donated the guitar. Fender Strat, Stevie Ray Vaughan Lenny was sold at an auction to Guitar Centre at an amount of 623,500 dollars. It is one of the most expensive guitars in the world.

Guitars are popular musical instruments that have been used by rock stars, pop stars, and celebrities from the music industry. It is as if every guitar has a personal story to tell.

When you have celebrities like John Lennon performing with his guitar at a packed stadium, it is bound to create history.

Do you know that the musical instrument later sold for a staggering amount and has become one of the most expensive guitars in the world?  Most of the guitars have also been named by their legendary owners and hence have become famous through association.