The 6 different types of attention

The Types of Attention depends on the circumstances and needs you may be facing. 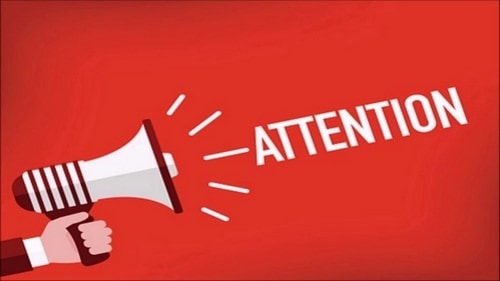 The example of sustained attention would be reading a book, memorizing a formula, listening to a lecture or playing a game. Amongst all Types of Attention, this attention is the most desired. This kind of attention requires a large amount of focus and determination to avoid from being distracted. This is the highest level of attention anybody can give and the intensity required for this is extremely high.

Also Read  What is an Entrepreneurial Ecosystem? Definition & Characteristics

In the case of selective attention, various kinds of stimuli are present in the environment and the listener chooses to focus only on a specific one while ignoring the rest. The brain is naturally tuned to avoid the unnecessary stimuli and focus only on the necessary ones. In some situations, giving selective attention would be very difficult but with practice, it would become very easy.

For example, trying to listen to a voice on the phone in a party with loud music is selective attention. In this case, it is very easy to focus selectively but in other cases, it may not be so easy. It is something that everybody does in day to day activities. It does not depend on the nature of the stimulus but on the attention of the observer. For example, a woman may not wake up to the sound of an everyday train going past her home, but would wake up immediately to the sound of her baby.

This is a very critical form of attention wherein the responder focuses on more than one response and reacts to them simultaneously.

The other, more commonly used term for divided attention is multitasking which is juggling between two or more tasks. It is common that due to divided attention the user may get exhausted fast since it uses mental focus on a large scale.

Although the definition of divided attention says that the user focuses on two different tasks at hand, it is practically impossible to give the same amount of focus to both the tasks. The brain has the Limited amount of attention that it can provide and if the person is having two or more tasks, the percentage of attention does not increase but the entire available attention is split for different tasks.

Also Read  What is the Importance of Safety?

Divided attention at times requires muscle memory. For example, when you are learning a bicycle to ride for the first time you require a lot of sustained attention to learning and if you try to give divided attention, you may not perform the task at hand.

Suppose you could measure the attention into a percentage, the amount of attention a person has 100% at hand.

Supposing a person is in a party talking to someone on phone and if he gives 20% of his attention to music in the background, 50% to the voice on the phone and 30% to see if he finds someone known in the party, it is an example of divided attention.But if he gives 100% attention to the voice on the phone and then pauses the talk and shifts the entire attention to an announcement it is called alternating attention.In alternating attention, one task is entirely ignored while the focus is only on the other task and it is the exact opposite of multitasking.

This attention is categorized on the basis of sensory organ that is used which is eyes. Having a visual attention means blurring out all other stimuli and focusing only on the inputs received by eyes. The perfect example of visual attention is seen in case of Olympics when the shooter focuses on his aim to shoot.

A Detective may utilize full visual attention to find out the clues to solve a case. People who have impaired hearing have to use visual attention completely to understand what the other person is trying to say. Visual attention is also used in case of advertising or reading. Eyes are at work while information is processed by the brain and all other senses are at rest.