“An issue is held in balance by the interaction of two opposing sets of forces – those seeking to promote change and those attempting to maintain the status quo.” (Kurt Lewin).

Many a time’s theories from modern psychology can actually be successfully applied in business. I believe that the most well known example which we are taught from the first lectures, is Abraham Maslow’s Hierarchy of Needs. However, another example, about which we will discuss today is the one created by the American psychologist, Kurt Lewin. Considered to be the father of modern psychology, Kurt Lewin is best known for Force Field Analysis and Force Field Diagram. 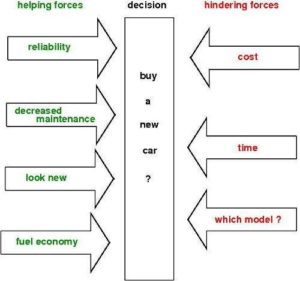 An example of Force field analysis.

In analyzing the forces of a change, there are two main forces in action.

Driving forces are the ones which are are sustaining the change and restraining forces are the ones which are restraining the change. Thus, if customer wants a new product, than it is a driving force for the company. On the other hand, if your company is not capable of handling the technology for new futures, than it is a restraining force. The force field analysis helps in determining which of the forces are strong (driving or restraining). And once the stronger force is decided, the company can come down to an effective decision for change.

Completing a Force Field Analysis will help you in better explaining your decisions and it will also be a useful tool in the actual process of decision making. By identifying the forces which are strengthening the change, you can take decisions to support those forces. The same goes for the restraining forces. Once identified, different strategies can be considered in order to manage them.
Examples of forces that can be taken into consideration when performing this analysis could be the available resources, traditions, organizational structures, regulations, relationships, institutional policies and norms, etc.

Also Read  Top 9 Tips on How to Make Decisions Properly

The process of conducting a Force Field Analysis can be said to be quite easy, but might involve a lot of work. The first step would consist in establishing which are the problems for which you need the change. If you develop a goal for these problems or you determine the exact change that should be implemented, than you can think in an organized manner during the force field analysis.

Second Step – By drawing a diagram divided in two columns, you are going to list the driving and the restraining forces. As one of the main critic of the current tool is that it involves a lot of subjectivity, the best way to try to avoid it as much as possible is to brainstorm with other relevant employees.

Third Step – After establishing the forces impacting the required change, you should score them on a scale from 1(the weakest) to 5(the strongest). The criteria on which this will depend consist in the strength of the force, as well as the degree to which it is possible to influence it. After scoring all the listed forces, a total score for each of the two columns should be identified. The end result will provide you with a bigger picture and a clearer overview whether the change is feasible or not.

It might sound easy to do it, but it generally involves heavy brainstorming. Finding out what business benefit will the change deliver, the involved costs, relevant persons who are pro and con the change and the main reasons behind this or identifying other parts from the value chain that might be affected by the change, are just some of the milestones in the thinking process.

Once you have decided the feasibility of the change, you can back up your strategy through another tool provided by the same author, called Lewin’s Change Management Model. Other tools which could be employed in developing a clearer Force Field Analysis are the stakeholder analysis, “what if” or the impact analysis, ending with a risk assessment analysis. Remember only that the success of such kind of tool consist in the objectivity of your assumptions and considerations.