Home » Economics » What is Demand Analysis?

In economics, demand is described as “desire backed by adequate purchasing power”. It is defined as the amount of a commodity which a consumer is willing to purchase at a given price in a period of time. In economics, the demand for a commodity refers to both the desire to purchase the commodity as well as the ability to pay for it. Since a business would not be able to exist if there was improper demand estimate or demand forecast, hence demand analysis is one of the most important aspects of managerial economics and it is studied in great detail.

The step 1 in demand analysis begins by understanding the various types of demands which exist in the market.

Demands can be categorized as follows :

Some other types of demands are :

The 2nd step in demand analysis begins by understanding the factors involved in creating demand.

Several factors affect the demand for a product or service. These factors are as follows:

Demand function is a mathematical relationship between the quantity demanded of the commodity and its determinants. It can be represented as

Where Q = quantity demanded of a commodity

Demand functions are generally of two kinds. They are:

Law of Demand was given by Alfred Marshall and it describes a consumer’s behavior in demanding a commodity in relation to the variations in its price. The law states that other things remaining constant; the higher the price of the commodity, the lower is the demand and lower the price, higher is the quantity demanded. In other words, demand of a product varies inversely with a price when other things remain unchanged.

The conventional law of demand is given by the following formulae :

Px= Price of the commodity x

Law of demand is generally operational due to its variations in substitution effect and income of the consumer. The following table will simplify the law of demand:

Let us now plot a graph for the above table. 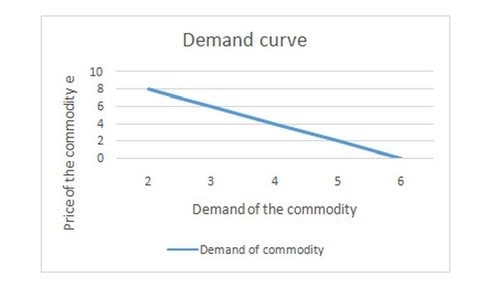 As we can see, the demand curve slopes downwards from left to right. This is due to the following effects:

Like everything else, the law of demand too has exceptions. These are listed below :