Agreements are an integral part of the business. Every business will have several Types of agreements in place for the smooth functioning of the organization and processes. These Types of Agreements also help in dealing with scenarios of difficulty. Agreements are also known as contracts in which there are two or more parties involved and they both are bound by agreement enforced by law. 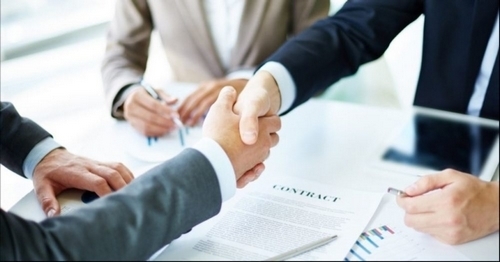 It is an agreement in which two or more partners spell out the relation and individual obligation along with their contributions to the business which is mutually agreed upon. Partnership agreements are very common in every organization.

Indemnity literally translates to hold harmless. Therefore, an agreement in which one party explicitly agrees to indemnify another person or party or parties for damages that may result from an agreement is called indemnity contract or indemnity agreement. An example would be a pet store owner would ask the pet store workers to sign an indemnity agreement to prevent legal problems if a pet bites the worker in any case. The worker may still be covered with medical expenses from the employer but this is to avoid the lawsuit of hurting the employee on purpose.

It is a legal and forced agreement that ensures a business owner or a company to purchase the said item in the given quantity for a price which is mutually agreed upon with specific terms and conditions for the delivery and payment. Purchase orders are common in sales and many organizations issue a purchase order to avoid for the dispute. It is the job of the sales team to get purchase orders from their customers. In some cases, even customer service may help to get the purchase order.

This agreement will ensure monthly payment deposits and other terms and conditions for the disease of a building a piece of land or an equipment. It is generally agreed upon that equipment and properties is covers the maintenance charges with the party who has leased the equipment.

It is perhaps the most commonly used agreement by people involved in businesses and non-businesses alike. It is a legal document that transfers title of property or a product and serves as an evidence for the terms of sale between the seller and the customer.

It is an agreement which jots down the relation between the employer and the employee, the remuneration, the benefits, terms and conditions, job description and any other issues that relate the employee to the workplace. All the organizations have a gentle employment contract to enroll any employee.

A security agreement is one which the borrower pledges to keep an asset of any kind as a collateral to get a loan from the lender. It comes with the condition that in case the borrower is not able to pay the principal amount, the lender may transfer the ownership of the asset mentioned in the agreement, to himself.

The supplements for people who are working individually as a contractor. This agreement is between two people one of which works as an individual and independent contractor who provides a particular service to the other person. The agreement without terms and conditions which delete both the hiring person and the individual contractor.

This agreement specifies that for a specific period of time, after leaving an organization the employee is prohibited in any way, to compete with the organization getting involved with any such organization that competes with the earlier organization. Usually, a General Employment contract will have with Non-Compete Agreement and Non-disclosure agreement together for employees.

It is an agreement in which there is mutual understanding between the parties that are involved and each of them promises to implement an action in exchange for other parties’ action.

Unilateral contract or agreement is when only one party makes an unasserted promise or ensures to fulfill the performance without obtaining other exchanged agreement from the other party. only one party is exclusively involved in the unilateral agreement. The promises are fulfilled without the involvement of the second party.

When one participating party in the contract has all the leverage along with additional bargaining power, and the agreement is legally binding to all of the parties involved in it for executing of a specific thing or process while it is used to create the contract to benefit all of them is called Adhesion agreement.

It is a legal record of the loan wherein the parties involved agree that a certain amount is borrowed and is to be returned on an agreed date. In other words, the promissory note is a legally enforced document which says ‘I owe you’ a certain amount of money or services.

It is an agreement to sell a certain stock, in pre-decided quantity by all the participating parties, to a specified individual. The individual would owe the organization payment on agreed terms and agreed price. Post completion of Stock Purchase Agreement, the parties may either extend or terminate contract thereby taking back all the unsold stock, if any.

They are also known as ‘transfer from a sole proprietorship to a limited company transfer agreement’. These are usually executed in order to transfer a business from an individual owner to a company. Transfer agreements are extremely complicated owing to the ownership and segregation of assets and liabilities.

When two or more companies agree to pool and share all the resources and profits at a pre-decided percentage, is called a Joint Venture Agreement. This agreement facilitates the mutual benefit of both the parties involved. Joint ventures pools resources and reduces risk while shares challenges. Joint ventures are great when an organization is expanding in a new country.

The above were all the Types of Business Agreement which are used by various parties or businesses to form a law bound contract between them.