The economic growth of a country has highs and lowly within the fiscal year. These highs and lows form a Business Cycle which is a very important tool in analyzing the country’s economy and making informed decisions.

The Business Cycle is characterized by five different phases; the expansion phase, the peak, Recession, the trough, recovery and expansion phase. These phases are economic magnitude fluctuations that represent a country’s economic activity in terms employment, production, investments, and prices of major commodities, wages, and availability of credit. In most cases, only two phases are much considered i.e. the Peak and Trough. The others are majorly intermediary as shown in below figure;

Phases in The Business Cycle

This is the initial stage of economic growth. It is represented by a curve line that moves steadily up from the level line of growth. During this time of the economy, there is more production, more employment opportunities, profitability, more demand for goods and services and more investment opportunities.

During this phase debtors repay most of their debts since they are in a good financial position, this, in turn, results to more lending from creditors but at increased rates; all these economic activities lead to increased flow of money in the economy until the peak level is reached.

At this level, the expansion phase slows down. It represents the point where the economic growth is optimum. The economic factors here do not increase further because they are stretched to the limit. Also, factors of production start increasing in prices resulting in gradual decline in consumer expenditure

As explained, in the peak phase; the demand for various goods starts to decline gradually due to high prices of the factors of production. When this decline becomes steady then the economy enters the recession phase.

In this phase, all the economic factors i.e. investments, savings, production and prices among others are on the downward slope. Unaware of decreasing demand for goods and services, producers continue with production until supply exceeds demand.

With more supply, cost of production becomes higher than the profits generated, when more manufacturers realize about the situation, they seize investing on the factors of production e.g. machinery and labor. Low demand for these factors will eventually lower their prices.

If the recession continues beyond normal levels, the economy reaches the Trough Phase. At this level, there is very little or no government income and expenditure, the county’s economic growth is actually negative. The trough is the exact opposite of the peak phase; debtors find it difficult to clear their debt balances prompting the commercial bank to hold onto deposits thus little or no lending. Economic output levels also decline and unemployment rate soars. Again, investors do not take risks meaning there is reduced trading on the stock exchange. During this phase, some organizations may dissolve and non-profiting industries close down leaving the economy at the lowest

The Trough Phase is the lowest level in the business cycle; as low as it may be, it actually represents the level of optimism through which economic recovery begins.

The reversal of the business cycle starts in this phase. Firms improve their interest towards production factors and improve their production output. Improved production will lead to more labor input and more hiring. Also, investors develop a positive attitude towards investment and start trading on the stock exchange. Consequently, demand for goods increases steadily as consumers feel that prices might not fall further in future. Additionally, lenders and commercial banks utilize the accumulated deposits by investing in higher returns’ securities and bonds. Increased investment in securities eventually increases their prices and lowers the interest rates.

The price factor plays a very crucial role in this phase of the economy. During the recession, it was observed that the prices of the factors of producing final goods decline at a higher rate compared to that of the finished product. In the recovery phase, therefore, when commodity prices start to increase, they don’t increase at the same rate with that of the factors of production; this, therefore, means that producers will be able to earn some profits. More increase in such positive economic activities will lead to expansion and eventually economic growth prosperity 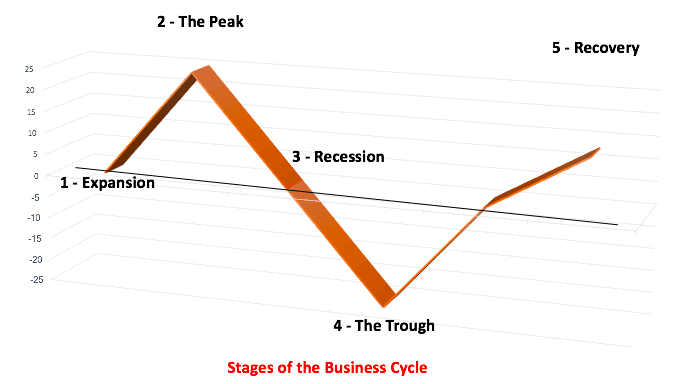 In most economies, the business cycle is determined by the Economic Research Bureau through the utilization of Gross Domestic Products (GDP) or use of Economic Indicators (E.I) like Employment, Retail sales, production and real personal Income (RPI). GDP or Economic Indicators analysis takes time so individual analysis of some of these indicators helps one determine the phase the Economy is in.

The business cycle is managed by the following two institutions;

The main purpose of monetary policy is to create a sustainable economy which is quick enough in production, investment, and creation of employment but again slow enough in avoiding recession and inflation. The factors that shape every phase of the business cycle are majorly three i.e. Consumer Confidence, the forces of demand and supply and availability of credit or capital. Consumer confidence supersedes all. This is because with confidence there will be more faith in the policymakers and more risk will be taken in various investment opportunities