Definition: Bartering is defined as an act of exchanging goods or/and services between two or more parties without using any monetary medium of exchange or direct money. Instead, in this, exchanging a commodity or service equal in value to another good or service occurs.

Bartering is the form of exchanging one commodity or service directly for another with no use of the medium of trade such as money or any monetary method. This generally takes place in businesses between two or more parties, like when they barter goods or services centered on equal approximations of values and possessions.

Two entities discuss fixing the relative worth of their commodities and facilities then bid them to one another in an even trade.

The barter system of exchange of goods is the oldest method of trade that was used even before currency came into being. Around the late 1970s, bartering has come into the picture and in its very new form. It is considered to be important nationally as well as globally.

Bartering is facilitated through the medium of the internet nowadays. The barter companies and systems have developed. These organizations have developed and sustained new forms of exchange in the form of “trading credits.” Barter exchange offers new ways of exchanging goods and services by receiving goods at a lesser price. Trading gains are taxable. Trading costs are deducted just like the other costs from taxes.

Bartering is usually operated directly among two individuals or businesses. Though, it may be completed simultaneously by a trade exchange. Developed countries generally don’t involve barters unless they are done in combination with the standard monetary system of the country. Even after that, it is used very rarely.

During a monetary crisis or downfall, a barter system is often created to continue the trading of goods and services and keep a country operational. This may happen if physical money is merely not available or a nation faces hyperinflation or a deflationary spiral.

The history of the barter system goes back to the era of 6000 BC. Mesopotamia tribes introduced bartering. Phenicians adopted this method to barter goods to many cities.

Salt was the only popular item exchanged. Europeans traveled throughout the world in the middle ages to barter furs and crafts in exchange for perfumes and silks.

Silent barter took place between individuals who belonged to different nations and couldn’t speak a common language. For measuring the value of exchange, measuring sticks were used to measure the number of goods and services. Eventually, the language barrier and land barriers were broken down.

Modern bartering is different from the older days. The barter system has been renewed in this digital era by the internet. After the financial crisis in 2008, the online barter exchange system became more famous with small organizations. Modern bartering imparts a pliable way to exchange using trade pounds such as unique currency, coins, and plastic cards.

One of the most usual business-to-business barterings involves dealing with advertising rights. A good example of this can be: A company sells ad space to the other company by exchanging the right to advertise on the space of the second company. Advertising rights can be for internet advertisement, billboards, television and film rights, and other different types of media.

Bartering has been considered as a form of revenue, and it must be counted under taxable income by the Internal Revenue Service (IRS). The distinction between various forms of barter systems is recognized by the IRS as there are a little bit different rules and regulations for every type.

Different countries adopt bartering systems. When unable to get financing or in high debt, they can engage in this system. Goods and services are usually exported in exchange for the goods and services which the country requires. This procedure can help the countries to reduce debt and manage the trade deficits.

How to do Barter Exchanges with ease? 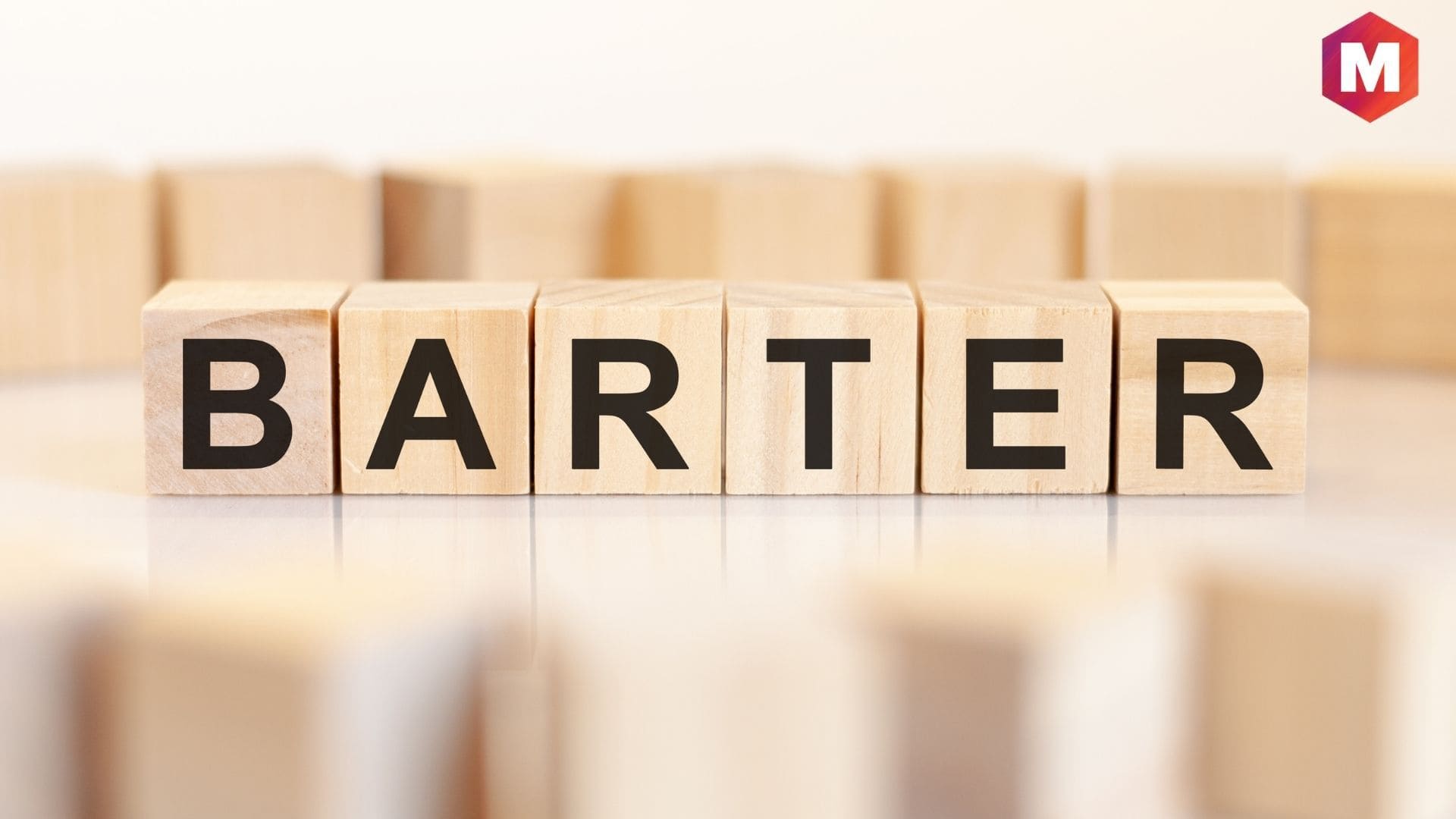 Identifying correct resources is vital for barter exchanges. Assessing products and services is important and then offer. It can be goods or talent and skills like yoga classes, photography, and many more.

Identifying someone’s need for some product or service stands very important for bartering. Getting to know which specific thing can be bartered to a person, according to their need, can be very appreciable.

A successful and positive bartering can result in satisfaction from both sides. The items must have some real value. Accurate appraisal and the correct price tag are vital for trading.

Finding the perfect bartering partner is necessary. Word of mouth works wonders if finding a specific person is difficult. In this digital era, showcasing your product and services on social media platforms is too easy. Persons and businesses can connect and buy that product or service within less time.

Online auctions and swap markets have a bartering element. The local Chamber of Commerce can provide necessary information regarding the barter systems.

With a perfect bartering partner, an agreement in writing has to be done. The details of goods and services such as any recourse or date of exchange have to be mentioned for future benefits. Paperwork is a very crucial part of the barter exchanges.

There are various causes why a barter economy or being able to trade is valuable. There may be situations where cash is not voluntarily accessible, but commodities and services are.

Bartering consent entities to exchange goods or services they have possession of but are not using for the other expenses they find necessary. They save their money for expenses that cannot be compensated through barterings, such as loans, medicinal fees, and daily necessities. Barter exchange offers flexibility while exchanging goods or services.

Bartering could also have an intellectual advantage because it can develop a deeper personal relationship amid trading associates than a standard monetized deal. Bartering can also assist individuals in socializing and building professional connections, and expanding their businesses.

The difficulties of international trade, such as the foreign exchange crisis, the adversative balance of expenses, do not occur under the barter system. There is no difficulty in applying economic power into the hands of a few wealthy entities under the barter system because there is no option of preserving the commodities. Individual and natural resources are preferably used to satisfy the needs of the people without including any waste.

One of the significant issues with bartering is a correlation of needs. For example, if a person wants rice in exchange for a book would have to find someone who can give rice in exchange for a book. Such a condition involves great difficulty and wastage of time in today’s world. It rarely even occurs. The individuals are obliged either to own goods for long periods or to make frequent intermediate trade to receive the goods of their choice lastly.

The lack of a standard price unit creates great difficulty because a lot of time is lost to hit a bargain. Because there is no standard measure in terms of which the value of a product can be expressed, the problem arises how much rice should be exchanged for a book. Barter systems may create disagreement concerning the quality of goods or services to be reimbursed in the future. The two individuals may not be able to agree on the exact good to be used for repayment. Another issue faced in bartering is that the goods and services cannot be moved conveniently from one spot to another.

Bartering is an old method adopted for exchange long before money was invented. It involves the trading of goods and services without the usage of money. It is a convenient method used by two or more parties to trade.

Currently, bartering has made returning methods that are more advanced to help in trading. Nowadays, the internet is one such medium used. Previously, this system involved people living in the same place, but today bartering is worldwide. The cost of bartering goods can be negotiated with the other side. Bartering doesn’t include money which is one of the pros.

Individuals can buy products or services by swapping another product or service they do not require. Usually, exchange in this way is done through Online sales and exchange markets.

How effective do you consider barter systems in deciding fair market value for the exchange of goods or services between two parties?