Home » Marketing articles » Made in India – The branding of India

Nation Branding –  Nation branding refers to branding of a country in terms of its reputation in the global scenario. Few of the practices involved in nation branding is constantly measuring the Nations growth in economic space, attracting tourism, exports, attracting talent pools, technology innovations, cultural heritage etc. The concept of measuring country’s global perception across various dimensions was developed by Simon Anholt in the year 2005. It is defined as Country branding Index or Nation branding Index. 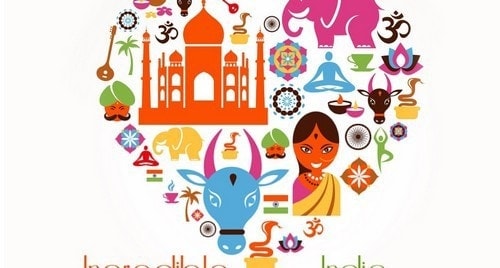 IBEF is a Trust which was formed in association by two entities namely Ministry of Commerce and confederation of Indian Industries (CII). IBEF’s core focus is to promote the ‘Made in India’ brand and to increase awareness of Indian products in overseas market. IBEF works along with various knowledge partners to communicate the message about Indian Business Stories through the form of CDs, posters, magazines, newsletters and reports.

The article focuses on the perception of the brand ‘India’ across the world and the driving forces that makes the “Made in India” brand to be the fastest growing brand in various verticals like technology, IT, Automobile, Medicine, Telecom, Banking & Financial services, Manufacturing, Retail, Infrastructure and Educational sectors.

The brand India is linked to the various components of a typical brand attributes.

The brand India has different facets of eminent personalities who have captured the hearts of global audience. Those include personalities like Mahatma Ghandhi Ji, APJ Abdul Kalam, Ar Rahman, Sachin Tendulkar, Ratan Tata, Shiv Nadar (HCL),  Narayana Murthy ( Infosys ) etc who have contributed a lot in taking the Brand India to its acme.

The name India has also been referred to as Bharath or Bharatam. In his book India Ethos and Values, Indian Professor Ajith Shankar has quoted various scriptures and described the etymology of the word ‘Bharath’ as follows

Also Read  How To Become A Millionaire? 10 Steps to Become a Millionaire

The country India is often referred to feminine attributes of God. The tagline ‘Incredible India’ by the Indian Tourism depicts the scenic and serenity of India with invaluable natural assets and monuments, sculptures depicting brilliant architectures of the century.

There are many examples to prove the promise that India has delivered across the world in terms of health, Information and Technology, Automobile, Textiles, medical etc. Indian medical field ranks the fourth place in the world, in telecommunication India ranks second. The products like mobile phones, machinery components which were imported once are being exported with ‘Made in India’ Brand. India is the hottest selling market for all global companies. ‘Chennai’ is claimed to be the Detroit of Asia with various automobile companies invading Indian market and trying to setup their manufacturing base.

A country like India is rich with its rich cultural heritage and religious values like religion, Yoga, Ayurveda, Marriage systems and ceremonies etc.

The brand essence means the soul of the brand. The soul of India is its rich cultural heritage and values which are still unshaken or affected by western influence. India follows ‘Unity in Diversity’ with more than 100 languages and 400+ dialects, 28 states and 7 union territories. The concept of ‘Saving’ nature has helped Indian economic system to sustain its glory amidst global recession, where even the so called ‘Super Powers’ have felt the pain of economic slowdown.

In spite of many invaders starting from Aryans, Persians, Muslim invaders, Danish, Dutch, French, Portuguese and finally The English have tried to plunder the wealth of our Nation, it’s natural wealth and beauty still remains the same and proves to be a ‘Amudhasurabhi’. (The term is being referred to something which never gets exhausted.) There is no doubt that India will emerge as a Super power and once again prove its glory to the world.