Home » Economics » What Is Gross Domestic Product Or GDP and Role Of GDP In Economy?

GDP represents the value in monetary terms of all goods produced and services provided within a county’s geographical borders in a given period of time i.e. monthly, quarterly or yearly. GDP accurately indicates the size of the economy with GDP per Capita closely relating to living standards of individuals

The GDP equation is as below

When calculating GDP, It is important to factor in current dollars and constant dollars. Current-dollar GDP takes into consideration the economic activities in current day dollars. Its however difficult to make period comparisons with current dollar due to inflation effects

On the other hand, constant dollar GDP rate factors inflation thus allowing easy comparisons through the conversion of dollar value from other periods to present day.

GDP can either be Nominal or real. Nominal GDP involves measuring of raw Data whereas Real GDP measures data and takes into consideration the inflationary effects thus allowing for economic output comparisons for different periods. The information pertaining inflation can be obtained through can be through;

The growth of GDP from one quarter to the next is called GDP growth rate. GDP per Capita refers to the measure of GDP per person and is the most preferred in comparing GDP Data between countries.

Role of Gross Domestic Product in the Economy

Being a representation of a country’s economic health, GDP sums up the total country’s production i.e. from goods purchased to those produced within the geographical boundaries of a nation. When it declines for more than two quarters, the economy will be said to be in recession. On the other hand, when it grows rapidly, inflation may arise leading to increased interest rates from the Federal Reserve. GDP, therefore, plays the following important roles in the economy;

GDP’s ability to provide an overall picture of the economy is likened to a space satellite that surveys weather across continents. It allows central banks and policymakers to know whether the economy is expanding or contracting. It, however, has the following weaknesses; 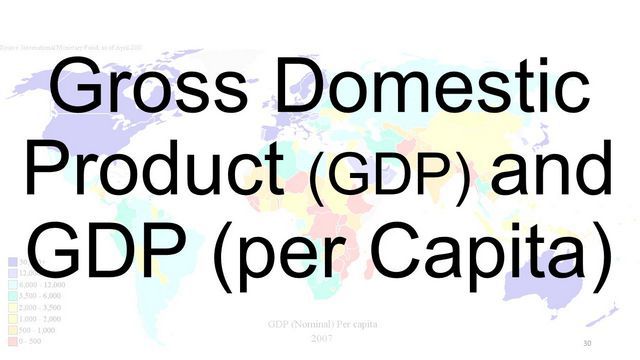 Among others, GDP also exhibits the following strengths;

Gross Domestic Product (GDP) may be considered a not very accurate measure of the economy compared to Gross National Product (GNP). It also may not include household production, nature’s negative effects and the citizens’ standards of living but it still remains the best method of measuring economic growth owing to its few data points.