What is the Economics of Production?

There are a variety of factors that businesses must consider when making production decisions. These include the market demand for the good or service, the availability of resources, and the average costs of production. Additionally, businesses must decide how to allocate their resources among the various stages of production to optimize economic value, economic profit, and total factor productivity.

The economic theory of economies of production typically focuses on two different periods: the short-run and the long-run.

In contrast, the long run is a period in which all factors of production are variable. This means that businesses can change any input they use to produce their goods or services. For example, if a business wants to increase its production in the long run, it can build a new factory or buy new equipment.

Production accomplished in a brief period is referred to as short-run production. The term “short run” factors into how much leeway a company has to change fixed costs, such as labor, machinery, size of the factory, or the number of plants. In the meantime, however, firms can play around with various manufacturing processes like overtime and raw materials to better suit their level of production.

Long-run output is the maximum amount of goods that a business can produce after making modifications to its equipment, factories, factory size, capital structure, and so on in order to expand or decrease capacity. These factors take longer to change.

Another important concept in the Economics of Production is a fixed cost and variable cost.

Fixed costs are costs that do not change with the level of production. For example, if a business has a lease on a factory, the cost of the lease will be the same whether the business produces one widget or one million widgets.

Variable costs are costs that change with the level of production. For example, if a business uses raw materials to produce its widgets, the cost of raw materials will increase as the business produces more widgets.

Businesses must understand fixed and variable costs when making production decisions. They must know how much it will cost to produce each good or service and how these costs will change with different levels of production.

Additionally, businesses must know how to allocate their resources between fixed and variable costs in order to minimize their overall costs.

The Economics of Production can help businesses understand the relationships between fixed and variable costs, market demand, and production levels. It can assist businesses in making informed decisions about their operations and maximizing their profits. 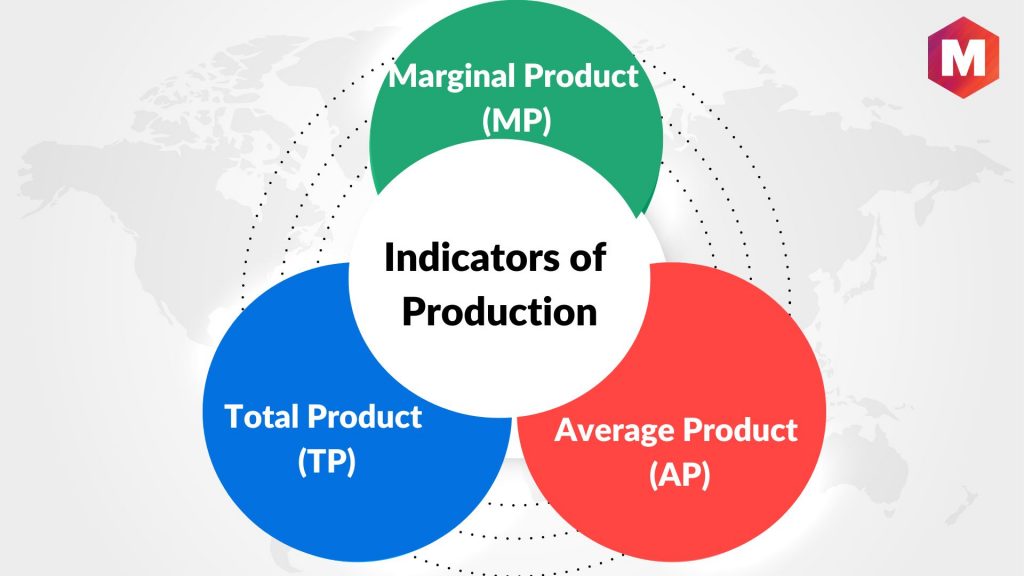 The total output of a firm in a given period. This is the sum of all the individual units of production produced by the firm.

The additional output is produced by increasing one unit of input. The Marginal Product of Labor (MPL), for example, determines how much more output a firm may achieve if it employed one additional unit of labor or in other terms, one more worker. However, most resources face diminishing marginal product; each extra input into the process leads to less additional production. It can be calculated using the formula-

The average output per unit of input.

Productivity is the ratio of total output to the number of units produced by a particular factor of production. Average product, like the marginal product, is measured for a particular factor of production. If we were to measure total productivity as divided by labor, for example, we would be calculating the Average Product of Labor. The formula for the average product is: 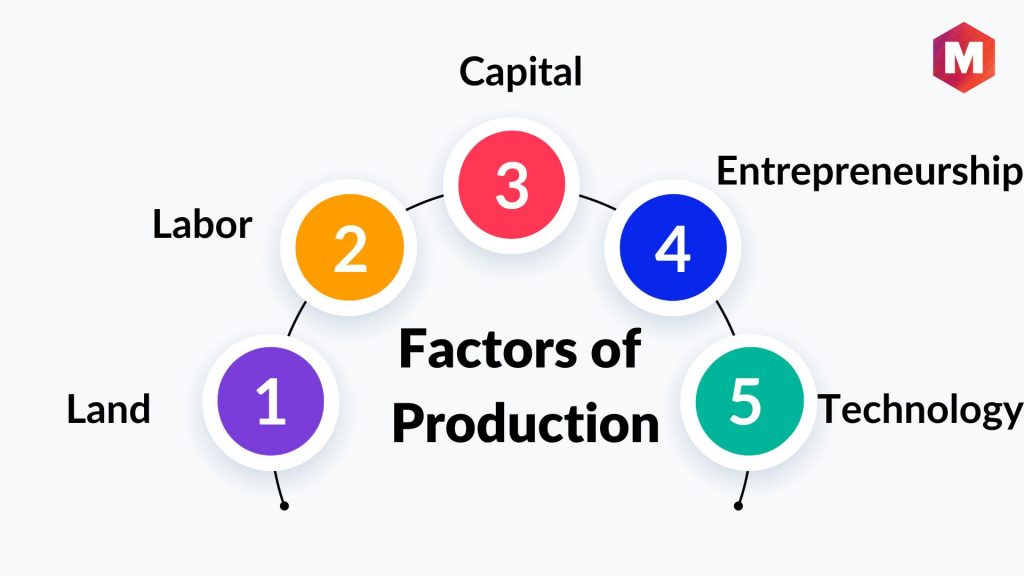 The primary factors of the production process are

Land refers to all of the natural resources that are used in the production process. This includes things like raw materials, water, and air. Land is a limited resource, which means that there is a finite amount of it available for use. Because of this, businesses must be careful about how they use land in their production processes.

Labor is the work done by an individual to create a product or service. It can be physical like the construction worker at a restaurant site, or it can be less obvious labor like the waiter who serves guests or the receptionist who enrolls them into the hotel.

2. Labor As a Factor

Labor refers to all of the human efforts that go into the production process. This includes things like workers’ skills, knowledge, and abilities. Labor is an important factor in production because businesses must create their products and services.

For example, if a business wants to produce a new car, it will need workers to design the car, build the car, and test the car. The business will also need managers to oversee the production process and make sure that everything is running smoothly.

3. Capital As a Factor

Capital refers to the money that is used to finance a business. This includes things like buildings, machinery, and equipment. It also includes things like inventory and accounts receivable. Capital is important because it allows businesses to expand their operations and increase their production levels.

For instance, if a business wants to open a new factory, it will need capital to buy the land, build the factory, and buy the machinery. Capital is also important because it allows businesses to finance their inventory and accounts receivable.

4. Entrepreneurship As a Factor

An example of this can be seen in the development of the automobile. The first automobiles were created by entrepreneurs who saw an opportunity to create a new product that would meet a need that people had. These entrepreneurs took the risk of developing the automobile and putting it into production. As a result, they created a new industry and changed the way that people live and work.

5. Technology As a Factor

An example of this can be seen in the manufacturing industry. The use of technology has allowed manufacturers to increase their output while reducing their costs. Additionally, technology has led to the development of new products, like cars and computers. The study of the Economics of Production is important because it helps businesses to understand how technology can be used to improve their production processes.

Ownership of Factors of Production

The ownership of the factors of production is an important part of the economic system. The three main types of ownership are private, public, and cooperative.

1. Private Ownership: Private ownership refers to when a business is owned by an individual or a group of individuals. This is the most common type of ownership in the United States. Private businesses can be small, like a mom-and-pop shop, or they can be large, like Walmart.

2. Public Ownership: Public ownership refers to when a business is owned by the government. This is less common in the United States, but it does happen. For example, the United States Postal Service is a public business.

3. Cooperative Ownership: Cooperative ownership refers to when a business is owned by a group of people who work together. This type of ownership is more common in other countries, but it does exist in the United States. For example, some credit unions are cooperatives.

Importance of Economics of Production

As a result, the Economics of Production is an essential part of any business or country’s success.

Main Processes of a Producing Company

Real process: The real process is the set of all processes that lead to the output of goods and services. This includes the use of land, labor, capital, and entrepreneurship.

Monetary process: The monetary process is the process by which money is created and circulated in an economy. This involves the use of banks and financial institutions.

Market value process: The market value process is the process by which the prices of goods and services are determined in the market. This involves the forces of demand and supply. Economics of Production deals with all these processes and tries to optimize them to achieve production efficiency.

Economics of production refers to the relationship between production costs and market price. In a competitive market, firms will produce at the output level where marginal cost equals market price. However, there may be other factors that influence a firm’s decision to produce a certain output level.

For example, if a firm has fixed costs, it may continue to produce even if the marginal cost is above the market price. This is because the firm may be able to take advantage of economies of scale and achieve cost advantages.

In conclusion, the economics of production is an important factor to consider when making decisions about output levels. Costs and revenue must be carefully analyzed to make informed decisions that will maximize profit.