An economic bubble is a financial situation in which the price of a good rises far above its real value. It occurs when prices exceed the intrinsic value of the asset. Bubbles here are also understood as a financial bubble, speculative bubble, or speculative mania. These bubbles generally take place due to the unlikely and overly optimistic future projections.

An economic bubble is when the price of a thing increases considerably above its actual value. Bubbles are often ascribed to a shift in investor behavior, albeit the exact reason for this shift is unknown. When there is a bubble in the stock market or the economy, resources are shifted to sectors of fast development. When a bubble bursts, resources are redistributed, leading prices to fall.

What Is Economic Bubble?

Definition: An economic bubble is defined as a situation in the economic contexts in which prices of any financial asset, or an individual stock, or even the entire market, sector, or asset class exceed their fundamental value by a huge margin. They are also known as financial bubbles or asset bubbles, and they generally comprise four primary categories such as stock market bubbles, credit bubbles, market bubbles, and commodity bubbles.

We all notice that economic trends around the world are dynamic and regularly alter due to political, geographic, financial, and socioeconomic variables. These developments frequently result in the emergence of economic bubbles. An economic bubble occurs when securities and assets are exchanged at much greater prices than their underlying worth.

The term “bubble” refers to the fast expansion of market value, generally followed by an equally quick decrease in value – a phenomenon known as a “bubble burst.” While some bubbles may be spotted as they happen or even anticipated ahead of time, they are frequently discovered after the fact. Economic bubbles may have severe ramifications for whole economies. At their most severe, they have the potential to cause recessions. 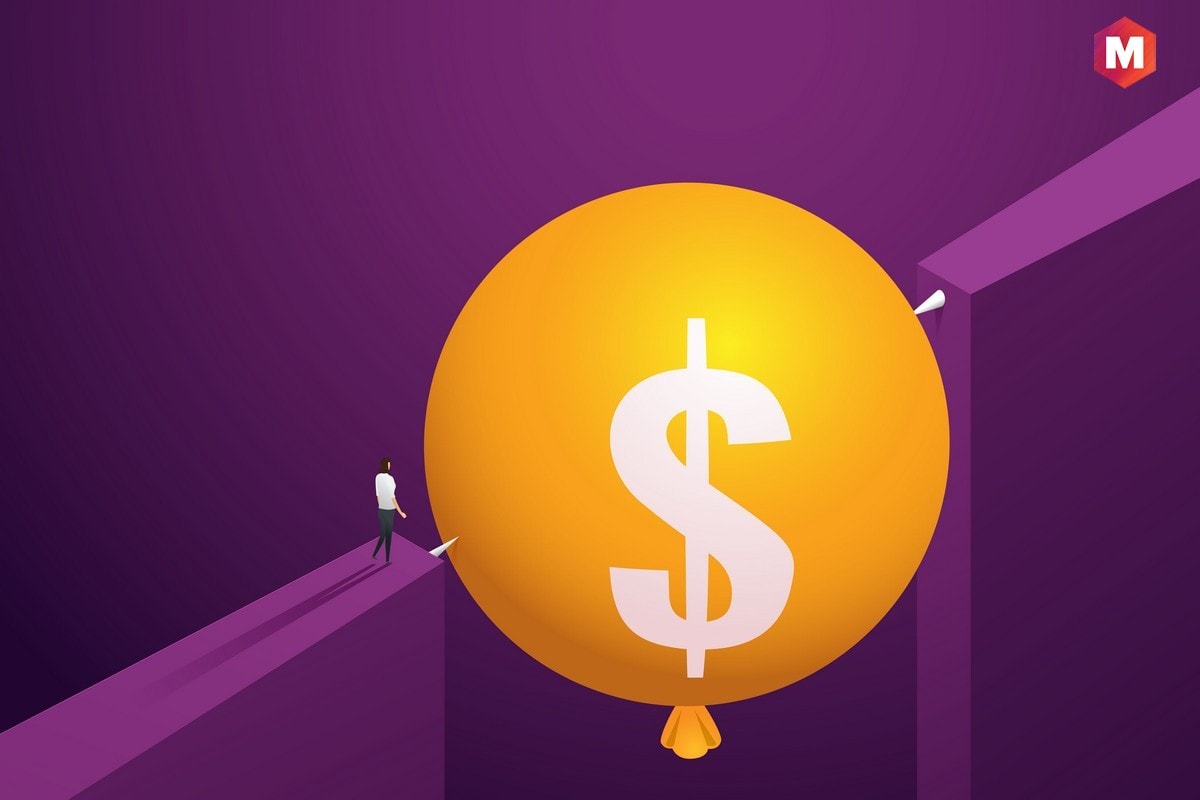 Economist Hyman P. Minsky is known for explaining the development of financial instability and how it is related to the economy. In the book Stabilizing an Unstable Economy (1986), he discussed five stages in a typical credit cycle. Let us have a look upon those stages here and now-

This stage occurs when investors become aware of a new paradigm, such as a new product or technology or historically low-interest rates. This might be anything that catches their attention.

Prices begin to soar. Then, when other investors enter the market, they gain even more traction. This sets the setting for the explosion. There is a general sense of failure to act, prompting even more individuals to purchase assets.

When enthusiasm erupts, and asset values surge, it might be said that investors’ prudence is mainly thrown out the window.

It is difficult to predict when a bubble will burst; once it has burst, it will not expand again. Anyone who can spot the early warning signs, on the other hand, will profit by selling their positions.

Asset values go off track and fall (sometimes as rapidly as they rose). Investors want to get rid of them at any cost. Asset prices are falling as supply exceeds demand.

Reasons behind a Financial bubble

Economic bubbles do not emerge for any particular reason. Economists and experts have differing opinions on the subject. However, the following conditions can result in the construction of economic bubbles: 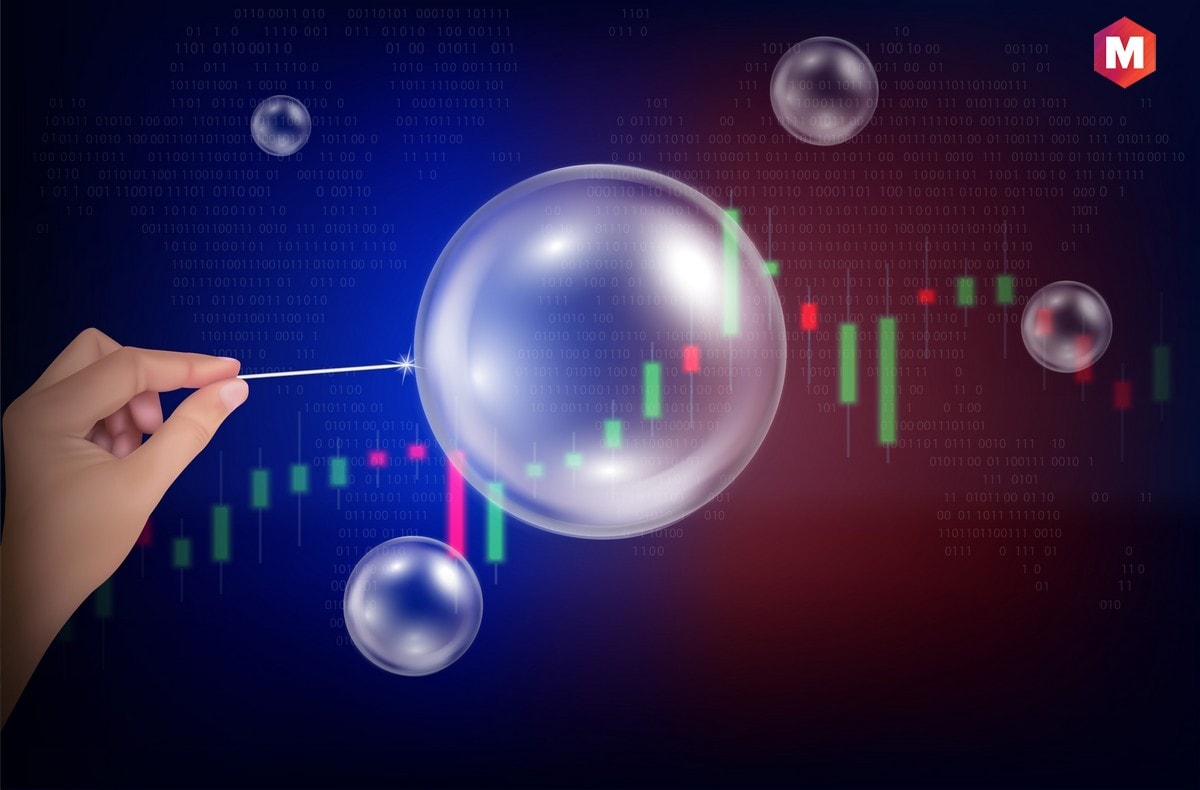 In the market, several asset bubbles may arise. However, they may be divided into four groups in general:

A stock market bubble forms when the market prices of equity stocks rise fast above their fundamental worth.

Such types of bubbles incorporate the overall stock market along with exchange-traded funds (ETFs) or equities in a specific market sector or field for example Internet-based businesses that were the main reason behind the dot-com bubble of the late 1990s.

Credit bubbles are characterized by a spike in demand for consumer loans, debt instruments such as bonds and debentures, and other types of credit. For example, if lending rates fall or debt instruments provide greater interest rates, a credit bubble may form.

These types of bubbles refer to the sudden surge in consumer or business loans, different forms of credit, debt instruments, etc. Some of the examples of such bubbles can be assets like corporate bonds or government bonds (like US Treasuries), mortgages, student loans, etc.

Commodity bubbles develop when the prices of commodities such as oil, gold, and other industrial metals, crops skyrocket.

Commodity types of bubbles involve an increase in the price of traded commodities.

Other sectors of the economy are affected by market bubbles. A market bubble, for example, will arise if a bubble forms in the real estate business.

Such bubbles include other industries or sections of the economy that are outside of the equities market. On e of the key examples of this can be real estate is a classic example. The run-ups in traditional currencies like the US dollar or euro or cryptocurrencies such as Bitcoin or Litecoin can also come under this type of bubble.

The influence of economic bubbles is discussed within and between economic schools of thought; they are not typically regarded as useful, but it is debatable how destructive their development and bursting are.

Many people in mainstream economics believe that bubbles cannot be identified in advance, that they cannot be prevented from forming, that attempts to “prick” the bubble may cause a financial crisis, and that authorities should instead wait for bubbles to burst on their own, dealing with the aftermath through monetary and fiscal policy.

The impact on spending

Another crucial component of economic bubbles is their effect on consumer spending patterns. Market participants who own overpriced assets are more likely to spend more because they “feel” wealthy (the wealth effect).

When the bubble eventually collapses, people who hang on to these inflated assets typically suffer a sense of diminished prosperity and tend to restrict discretionary expenditure, stifling economic development.

Two of the popular and historical examples of economic bubbles are the dotcom bubble of the 1990s and the housing bubble between 2007 and 2008.

When we delve deep into the history of economic bubbles, the first recorded one can be the speculative bubble that occurred during 1634 and 1637 in Holland.

Though there are so many historical instances of financial bubbles, this Dutch Tulip Bubble or Tulipmania is understood as the first major financial bubble. Let us have a look at these bubble examples-

3. The Housing Bubble in the United States

Economic or asset price bubbles are frequently characterized by one or more of the following characteristics:

Real-time detection of economic bubbles is impossible. As a result, as an investor, you should exercise caution while investing in an upward trend. Check the intrinsic values of assets before investing in them if prices are rising. Check to see if the price you pay for one stock is reasonable.

When the cost of an asset exceeds its inherent value or worth, it indicates the emergence of a bubble. You can invest in such assets to maximize your profits. However, anytime there is a warning that a bubble is about to collapse, try to pay out those assets.

To determine if a stock is overpriced or underpriced, use financial measures such as the price to equity ratio or the price to book ratio. Invest in accordance with your risk tolerance. And consider your exit strategy before investing.