Direct costs are the costs which are entirely assigned to a particular project. These costs are not divided between different processes taking place in an organization like indirect costs. Direct cots make the most significant portion of the budget of a project.

These are considered as the most critical cost of the production process. In this article, you will learn about the definition of direct cost, different examples, and a method to calculate direct costs.

A direct cost is an expense which is directly associated with a specific cost object such as a business project, production process or department, etc. direct cost is usually a fixed cost, but it varies with the change in the amount of production output.

What are Direct Costs?

Direct costs take the topmost position in the cost sheet, and they make the 80% part of the total budget allotted to a project. For example, expenses required to buy raw material for the production process is an example.

The raw material can only be used for the production process and cannot be used in any other way. Therefore, the cost of raw material cannot be divided between different processes taking place in an organization like indirect costs.

Difference between direct and indirect costs 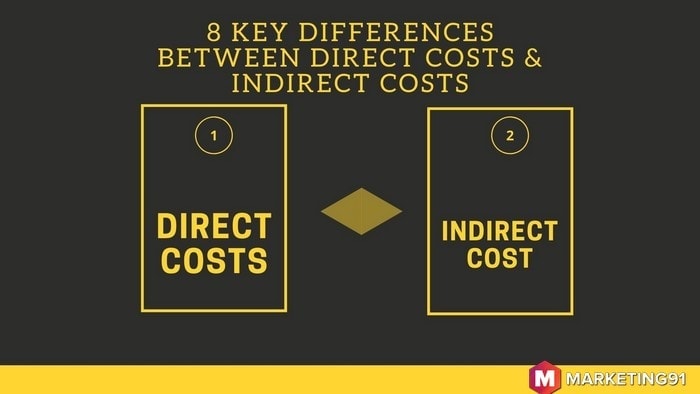 As we have learned before, direct costs are directly associated with the process, such as the cost of raw material, labor, consumable supplies. These things are only used for the production of a particular product and are irrelevant for any other process in the organization.

Whereas indirect costs are the costs involved for supplies which are used by more than one process. For example, office supplies, salaries of accountants and office assistants, rent of building, electricity and internet expenses, etc.

There are various costs associated with a single business process or production process. As we have learned, there are different types of costs which are related to a process directly or indirectly.

Costs which are directly related to a process can be calculated easily and can help in calculating profit made by the process easily, whereas the costs which are not directly associated with the process are difficult to calculate and hence, always remain uncertain.

They make it difficult to calculate the profit made by a business process. Therefore, it is important to learn both types of costs associated with the business process and key differences between both of them.

So that all types of costs from major costs such as raw material costs to the smallest costs such as office supplies can be included in the budget decided for the process. Knowing all types of expenses can help you in calculating profit made by a particular production process.

How to calculate direct costs?

Direct costs make the largest portion of the budget. Therefore, it is important to learn and calculate them so that they can be minimized and profit can be increased.

As direct costs are directly associated with a single process and cannot be used for any other process, the direct costs involved in a project can be calculated by simply adding all direct costs in the process.

Next, you will learn step by step process to calculate the direct costs with the help of an example.

1. List all the direct costs involved in the process:

A budget is needed to be allotted for the production process. The budget can be prepared by calculating all types of direct costs such as cost of raw material, labor cost, machinery cost, consumable supplies’ cost, packaging cost, and sales commission.

2. Mention the direct cost of each expense:

In the next step, assign the value of direct cost for each expense. The value can’t bee picked randomly. It should be calculated as per the requirement of the production output. Let us assign a cost to each expense involved in the production of product ABC of our example.

Here, we are assuming the values. Otherwise, these values are taken after analyzing previous projects and comparing supplies from different vendors. The budget allotted for labor is $10,000.

3. Add up all the direct costs associated with the production process:

The project can only be profitable if only revenue generated will exceed the total cost of production.