Demand letters are some formal letters of business which are sent to the debtor from the creditor demanding the payment of the amount due.

Well, the demand letter is very often written by some sort of law professional to make sure that there is a degree of professionalism as well as a degree of compliance with the different laws that are effective in case of a business.

In a general sense, the demand letter will not necessarily be sent until and unless the payment for the debt is far past the due date. In some of the other cases, it has also happened that the demand letter has been preceded properly by some amicable attempts such as phone calls and some other.

This is to make sure that the debtor always obliges to conditions set in the demand letter. The demand letter is often intercepted as the legal complaint when described in terms of a layman.

However, it is certainly a bit different from all of these for sure.

Introduction to the Demand Letters

In the US, certain demand letters always tend to fall under the preview that is provided in the Fair Debt Collection Practices Act, or these demand letters might also be subjected to certain laws of the state as well.

These are the laws that would outline all the rules which need to be followed when there is a process of debt collection that is going on. The debtor will be able to seek certain damages in case the rules aren’t properly followed in the best way.

Thus there is a need for having some legal counselling when it comes to dealing with the demand letters without any hassle.

Although these demand letters aren’t really necessary, these are pretty much used frequently and that too in the contracts law as well as the commercial law and tort law cases too.

It isn’t that uncommon when the false collection companies send the false demand letters to other businesses demanding some sort of immediate payment of the amount.

Even though the entire letter is fake, it can cause a certain level of stress into a particular company or person who is receiving the demand letters.

These schemes are pretty common in the world, and they often tend to result in several scams. The customer will not suspect the letter and will make some error in the payment.

When we talk about the length of demand letters, there is no set limit for it. However, when you are writing a demand letter, you need to take care of the fact that it shouldn’t be that long for sure.

The shorter you make the letter, the better it will be for us. The letter should have enough length, which is sufficient to convey the message.

Add something else to it, and it will certainly affect the worth and value of the letter, which is certainly something that you don’t want.

Most of the courts these days will require you to make some sort of formal demand to the company for payment even before you get to file the lawsuit against the company.

Even though it has been already established that writing the demand letters is not necessary, there are some benefits to sending the letters to the debtors.

Well, one of the main reasons why people choose the send the demand letters is that it helps in the catalyzing of the settlement happening between the creditor as well as the debtor without any hassle.

In case you are not able to settle down the case, you will be able to explain the position of yours in formal writing which will make sure that you are easily able to organize the entire matter in the best way. Here we are going to discuss more the benefits of having demand letters sent to the people.

One of the benefits of sending the demand letter is pretty much clear from this point right here. Having a concise letter sent to the debtor will make sure that you don’t have to take the trouble when it comes to the claiming of certain small issues in the case.

In case you have been unsuccessful in arguing with the adversary when you were facing them or having a phone conversation with them, then laying out your reasons that you owe them money in the letter format will get some more and better action for sure.

Now, you don’t have to be a cranky old face which is sat behind a counter demand for the money, and you can be serious in the disputes for sure.

The other party has to accept the fact that you will not be leaving any time soon. In case you sue the company, it might take a lot of time, effort, and energy from their side when it comes to defending their case.

Hence, they don’t have any other choice but to provide you with the payment. So, there is no doubt that with the help of demand letters, there will be an increase in the chances that you will get paid. Put it in writing, and it will provide more depth and value to the demand of yours.

That is one of the most important reasons why individuals and businesses from all over the world try and send the demand letters to the debtors for proper solutions.

#2. Helps In Organizing The Case

Another one of the main benefits that come along with sending demand letters is mentioned right here when you need to know about it.

There is simply not a single doubt that when it comes to making the small claims in the court, there are a lot of things that you need to do.

For starters, you have to fill out a particular formal complaint in the form of paperwork, which would further help in the initiation of the case of yours. After that, you also need to make sure that you can prove the case of yours too.

Now, to do that, you will need to collect the evidence as well. This is when you need to write the demand letter.

When you do that, then you will be setting the position of yours and the reasons that you have for demanding that particular amount of money from the other company, individual, or business that is the debtor.

When you are writing the demand letter which is to be provided to the debtor, you will be able to think very clearly about every single aspect that the case has.

You can evaluate the laws, the facts, and also collect the evidence which will be enough to prove the position that you have in the case. So, in a way, you will be more prepared for the litigation in case there is a need for it.

Example of a Demand Letter 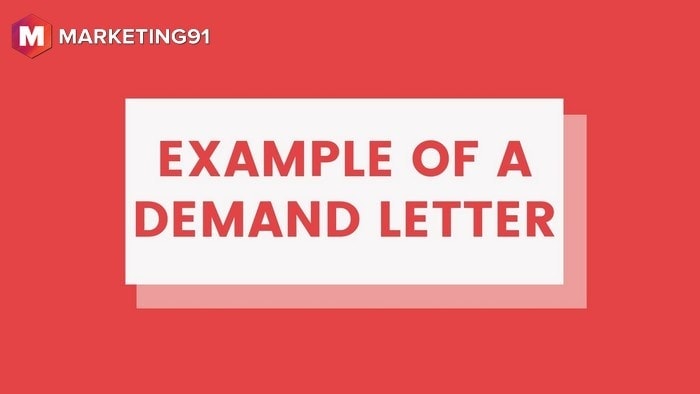 Let us provide you with an example to make you understand in a better way. Let us say that Sunil has purchased a shirt and jacket online on eBay from Gopal.

However, when it comes along, then Sunil realizes that there was supposed to be a jacket with it as well, and the design of the shirt is not that attractive without the jacket.

However, Gopal refuses to have that shirt back. He doesn’t talk properly to Sunil on the phone and cuts the call every single time. So, Sunil will send a demand letter to Gopal, and it will outline all the different aspects and then sent it to Gopal via some certified mail.

But then, Gopal doesn’t respond to it as well.

When the case comes to the court, Gopal feigns being totally surprised and claims that he didn’t know about the problem that Sunil has with the dress.

In such a case, the demand letter than Sunil sent to Gopal, outlining all the different aspects of the transactions and details about every single event can be presented in the court.

This demand letter will then act as the evidence which can be used to back the version of the story, which is told by Sunil. Hence, the case of Gopal will be less believable when it is compared to Sunil’s case. So, Gopal will have to make the payment after Sunil wins the case.

Let us now understand how to write a demand letter-

#1. Inclusion of all the facts

Facts vary as per one’s perspective, and that is why you must include all the facts related to the deal, the second party will also understand the story from your perspective as well. Also, it will help you in the court, as the judge will understand the case in a more lucid manner.

#2. Having a polite tone

Your tone should never be attacking because most of the times, reasons behind such issues are misunderstood that are inadvertent and not deliberate. So, the polite tone can help you in convincing another party to understand your side of the story.

You should never be prevaricating in your demand letter. You must ask what you want so that the issue can get resolved. Asking for a little more, so if negotiations happen, you still get the favorable deal.

It is highly recommended giving a proper deadline for the response upon your demand letter. One week deadline is considered good.

#5. Have a copy of each letter

Before sending your demand letter, you should have a copy of that letter as well.

#6. You should use your certified email

It is always suggested to use your certified email id for sending the demand letter. You should also be asking a return receipt or acknowledgement of your letter, as this will help you in the court.

So, that is all you need to know about demand letters. If you are experiencing the cases mentioned above in your life, there is no doubt that it will be a great help to you for sure.

Have you ever used a demand letter? Did we miss any key things about the demand letters? Share with us in the comments below.